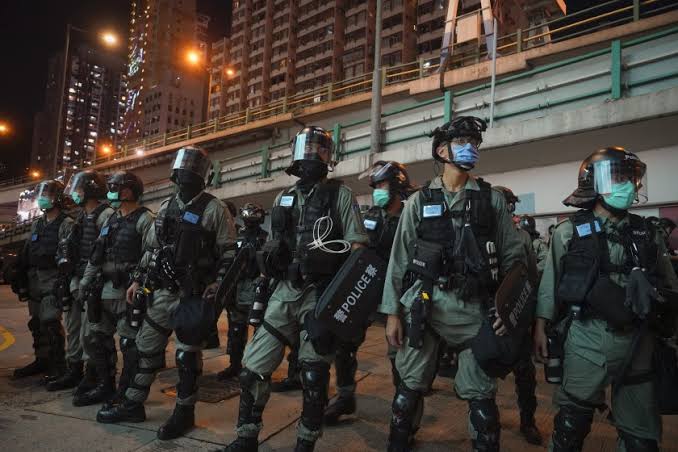 A culture of right-wing extremism was allowed to develop behind a ‘wall of secrecy,’ defense minister says

Germany’s defense minister disbanded a company of special forces on Wednesday, saying a culture of right-wing extremism had been allowed to develop behind a “wall of secrecy.”

Defense Minister Annegret Kramp-Karrenbauer told reporters that “toxic leadership” in the company was found to have fostered an extreme right attitude among some members of the Kommando Spezialkraefte, or KSK, unit.

Some of the 70 soldiers in the unit will be distributed among the KSK’s other three combat companies, while “those who made clear they are part of the problem and not part of the solution must leave the KSK,” she said.

FILE – In this Feb. 5, 2004 file photo, soldiers of (KSK) Kommando Spezialkraefte, German Bundeswehr’s special forces take part in a training exercise in Calw, southern Germany. Germany’s defense minister reportedly plans to restructure the country’s special forces unit after numerous allegations of far-right extremism. Defense Minister Annegret Kramp-Karrenbauer has called a press conference for Wednesday, July 1, 2020 to talk about a “structural analysis” of the KSK, unit, following up on an analysis she ordered in May. (AP Photo/Thomas Kienzle, File)

The entire organization’s training and deployments are being scaled back as the investigation into extremism continues, and reforms are implemented.
It comes at a time of broader concerns that Germany has not done enough to tackle right-wing extremism within its Bundeswehr military in general.

Kramp-Karrenbauer emphasized, however, that she felt reform was the right course rather than the dissolution of the entire unit, saying “we need the KSK.

“The vast majority of the men and women in the KSK and in the Bundeswehr as a whole are loyal to our constitution, with no ifs or buts,” she said.
The KSK was formed as an army unit in 1996 with a focus on anti-terrorism operations and hostage rescues from hostile areas. It has served in Afghanistan and the Balkans and its operations are kept secret.

Defense Minister Annegret Kramp-Karrenbauer (CDU) arrives at a press conference on the reform of the Special Forces Command (KSK), wearing mouth and nose protection, Berlin Germany, Wednesday, July 1, 2020. Since 2017, the KSK has been making headlines because of several cases of right-wing extremism. One suspected soldier even had an arsenal dug up. The Defence Minister has therefore had a reform concept developed to counteract extremist tendencies.

Military investigators have been looking into the unit since a group of public German broadcasters reported in 2017 that at a going-away party, members displayed the Hitler salute, listened to right-wing extremist music and participated in a game that involved tossing a pig’s head. In January, the military reported 20 soldiers are under suspicion of being right-wing extremists.

In May, the head of the unit, Brig. Gen. Markus Kreitmayr, told soldiers that he wouldn’t tolerate extremism in the ranks.

That month, Kramp-Karrenbauer established an independent commission to investigate the KSK and propose reforms, after a cache of weapons, explosives and munitions were found at one of the suspected extremist’s homes in Saxony which she said revealed a “new dimension” to the problem.

She said the investigation has revealed “grave deficiencies” in the unit’s record-keeping and that there were many missing items, including ammunition and explosives. It was not clear whether the munitions were used, left behind after deployments, or pilfered, she said.

“We cannot rule any of these out and are not,” she said.

A general inventory has been ordered, to include all KSK equipment and supplies.