Agni – V To Surya and Sagarika to K5 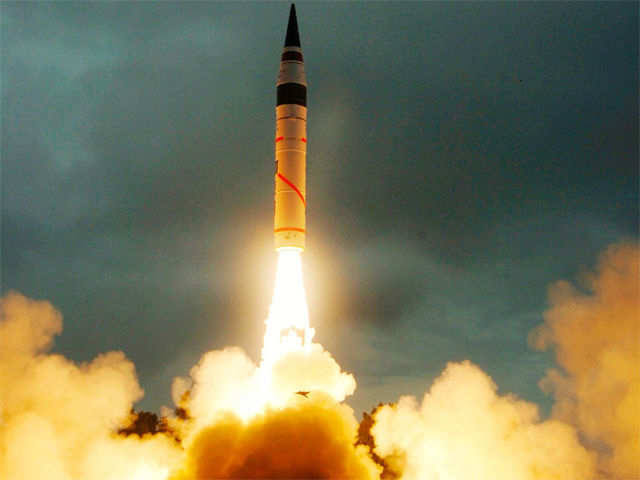 The Indian Nuclear deterrence was initially dependent only on the IAF Mirage 2000. This was more than enough for Pakistan but too meagre for China and stood no chance against threats if any from any other nuclear powers.

Then came the lowly Prithvi followed by a more reliable AGNI 1. With this Pakistan no more remained a problem but a large number of Chinese targets were still out of guaranteed reach. This gap was credibly wiped out with the coming of AGNI 5.

Now Indian Armed Forces, Strategic Forces Command ( SFC) have completed the process of operationalizing the longest range nuclear-tipped missile. A second pre-induction user trial of Agni-V was conducted which confirmed this fact. However to ensure that no corner of China or South China Sea remains out of reach we need a beyond 10000km land based cannisterized missile with rail / road move capability or in short the Surya ICBM.

Though a confirmed second strike capability can be provided only by a sea based strike platform. India also has a confirmed 700km B05 or K15 submarine-launched strategic missile which been fully operationalized aboard our INS ARIHANT.

This is certainly not enough to quieten the Chinese.So another long-range submarine-launched nuclear missile K-4 with range of 3500km has cleared developmental trials and is now closer to induction.

DRDO has now started working on K-5 SLBM with a reported range of over 5000km. K-5 is a nuclear capable submarine-launched ballistic missile being developed by Defence Research and Development Organisation (DRDO) for the Indian strategic forces’ underwater platforms.It will arm the future variants of Arihant class submarines of the Indian Navy.

The K family of missiles are submarine-launched ballistic missiles (SLBM) developed by India to boost its second-strike capabilities and thus the nuclear deterrence. Information about these missiles have mostly been kept as Secret. These have better and lighter rocket casings, advanced guidance technologies for greater accuracy and a capability to fly depressed trajectories to stay away from missile defence systems for longer,which DRDO officials are covertly working on.

While the Actual range of K-5 will remain classified but with MIRV warheads, the missile should be able to hit targets as far as 8000-10000 km. Indian Government seems to be non-committal to confirm or deny the development of Agni-VI with MIRV. However true capability to deter ANY ONE will come only with Surya equivalent Submarine Launched Ballistic Missile.

Where as ARIHANT Submarine will be armed with K-15, ARIGHAT and others will also carry K-4missiles with range of 3500km.Then will come the K-5 SLBM will be in India’s follow on Second line of SSBN, almost twice as big as the Arihant-class. These will be able to carry up to 12 K5 intercontinental ballistic missiles with MIRV warheads.

India at present is constructing Three Arihant Class Nuclear ballistic missile Submarine. INS ARIHANT HAS already has been inducted into Indian Navy and Second Submarine INS ARIGHAT is waiting to be inducted formally.While work is nearing completion on INS ARDIMAN.

India also plans to construct bigger and better Nuclear ballistic missile Submarines post completion of work on Arihant Class Submarines. These will be designated as S5 and will be as big as Ohio class nuclear-powered submarines currently operated by the United States Navy.India is also planning to develop Six indigenous Nuclear attack Class Submarines to patrol the vast Indian ocean.
Post Galwan, work on all the above projects must be expedited to ensure that we are ATMANIRBHAR with ATMASAMMAN intact.