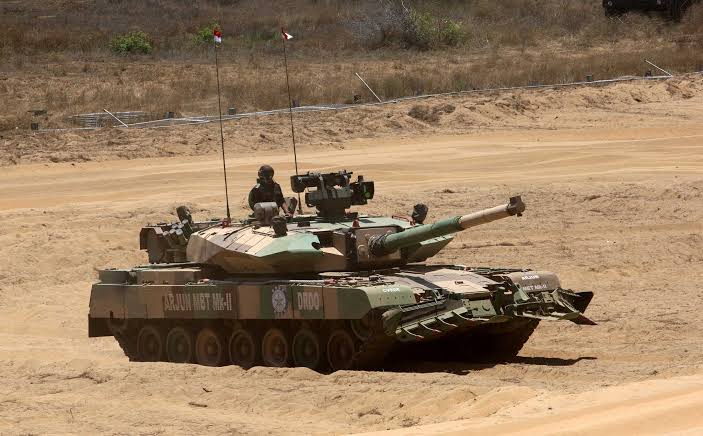 The DRDO had developed an improved version of the Arjun, called the Arjun MK-1A

Prime Minister Narendra Modi took a ride on Arjun tank while on a visit to Jaisalmer to spend Diwali with Defence Forces and Security Forces deployed in forward areas.

Now the Defence Research Development Organisation (DRDO) has expressed hope that it would soon be getting an order for supplying 118 Arjun Mark 1A tanks which are far more advanced than the present version.

Prime Minister Narendra Modi visited Army and Air Force personnel in Jaisalmer, Rajasthan, close to the border with Pakistan. As has been his practice, Modi distributed sweets to the soldiers and gave a rousing speech.

He referred to government’s stress on self-reliance and the ‘vocal for local’ campaign and complimented the armed forces for the decision to bar import of over 100 weapons and defence equipment.

The first of 124 Arjun tanks were delivered to the Indian Army in 2004. The Arjun has been the subject of considerable criticism given its significantly heavier weight of over 55 tonnes and issues with its engine.

The Arjun features a 120mm rifled-bore gun in comparison to a 125mm smoothbore gun found on the T-72 and T-90. It also has a formidable armour system called the Kanchan that was indigenously developed.

The DRDO had developed an improved version of the Arjun, called the Arjun MK-1A, which has improved fire control, sighting system and transmission compared with the first-generation Arjun tanks.

In March this year, it was reported that the defence ministry had concluded negotiations with the Ordnance Factory Board for 118 Arjun Mk-1A tanks, with a tentative price of $888.7 million.

“We were really proud to see the Prime Minister taking a ride in the Arjun tank in the deserts of Jaisalmer. We are now hoping that the Army would soon be placing orders for two more regiments of Arjun Mark-1A tanks,” DRDO’s scientist V Balaguru, the Associate Director of the Combat Vehicle Research Development Research Establishment laboratory of DRDO in Chennai.

The Army has, so far, inducted 124 Arjun tanks which are deployed in the deserts of Jaisalmer along the border with Pakistan.

Balaguru said the Arjun Mark-1A has 72 added features than its older version with the capability of taking care of anti-tank mines on its own with its mine ploughs.

The 12.7 – inch air defence gun also can now be operated from inside the tank by the tank commander using a remote control without exposing himself to the enemy firing in times of tank battles in open fields.

The exiting two regiments are deployed around Jaisalmer as part of an armoured brigade there.