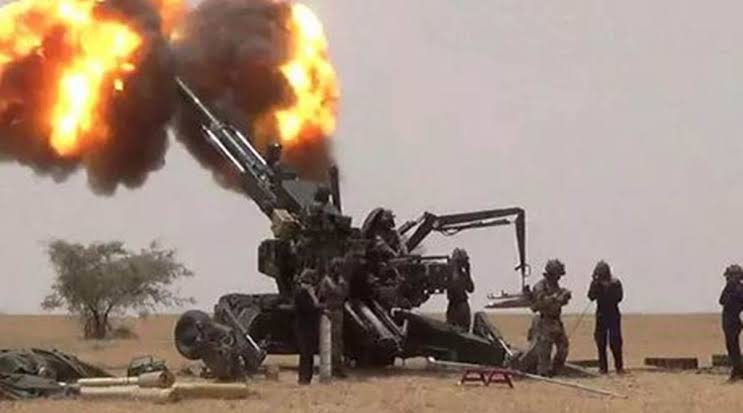 The Indian Army, in an internal report to the MoD, has said funds spent on faulty ammunition between 2014 and 2020 could have been used to buy 100 155-mm medium artillery guns

The Army has been complaining over OFB supplied ammunition for decades. The production has not only been of shoddy quality but has even caused loss of lives and costly equipment like guns and tanks. This has now reached a breaking point in the last two years. It has forced the Army to approach the Indian private sector to meet ammunition needs. However the MoD has pulled the plug on five of seven proposals that would have seen private firms step in to keep ammunition supplies running.

This staggering claim has been made in an internal Army report to the Ministry of Defence (MoD).

Calculating the loss to the exchequer due to poor quality OFB ammunition to be Rs 960 crore between 2014 and 2020, the Army notes, “Rs 960 crore roughly means 100 155-mm medium artillery guns could have been bought for this amount.”

The OFB, administered by the MoD’s Department of Defence Production, is one of the world’s oldest government-controlled production organisations, and oversees a nationwide network of factories that manufactures ammunition and weaponry for the Indian armed forces.

Earlier the DGQA which looked after the quality control was fully under the Army’s s control. However later it was placed under the MoD, Department of Defence Production which also controls the Ordinance Factories. Here lies the problem.

The Army report highlights the ‘poor quality production’ at the OFB, quantifying the losses both in monetary resources as well as human life due to accidents caused by faulty ammunition.

“Lack of accountability and poor quality of production results in frequent accidents. This results in injuries and deaths of soldiers. On an average, one accident takes place per week,” says the report that has been sent to the MoD, including accident and casualty figures.

There have been 403 accidents related to faulty ammunition since 2014, though the numbers of accidents have steadily reduced. From 114 accidents in 2014, the number reduced to 53 by 2017, rose again to 78 in 2018, and dipped once again to just 16 in 2019. But the human casualty figures are far more disturbing.

Listed under the heading ‘Casualties due to OFB manufactured ammunition and armament’, the report notes 27 troops and others have been killed in faulty ammunition accidents since 2014, with 159 being seriously injured, including permanent disabilities and loss of limbs.

There have been 13 accidents so far in 2020, though none of them has resulted in a death.

However, the effort to get private companies to become ‘mini-OFB’ type suppliers is desperately needed.

Earlier this month, the Army’s ‘ammunition-in-chief’, the Master General Ordnance (MGO) Lt Gen Upadhya said at an industry interaction, “OFB is in any case available to us. We want a parallel capacity to come up. It may not be at the scale of the OFB.

But to start with, at least a parallel set up should come and various types of ammunition would then be available from the industry which can then settle down and in the times to come, a scaling up can take place.”

The Army has a difficult situation on its hands, and one that needs to be navigated tactfully. On the one hand, pushback against the OFB goes directly against the MoD itself, even though the latter has begun a process of modernisation of the OFB.

Just this month, the Ministry of Defence appointed a KPMG-led consortium to advise the government on how to lift the OFB out of its legacy socialist structures and to corporatise it. OFB unions at factories across the country have aggressively opposed the corporatisation drive. So what happens, should Army also oppose the MoD through a union ??

On the other hand, the effort to include private sector firms has largely been one step forward and two back, with several companies – both big and small – expressing willingness to invest in capacity to produce and supply ammunition, but require a degree of clarity and assurance of orders, since they do not have the financial cushion and leeway enjoyed by state-owned concerns like the OFB.

What the numbers in the latest Army report indicate is that things have come to a head. And with India’s forces massed on the border in a war-like situation that will almost definitely stretch into the foreseeable future, the Army hopes the glaring numbers will force a solution to its decades-old ammunition quality, shortage and assurance problems.