Caliph Erdogan Is The New Destroyer Of Regional Peace And Stability 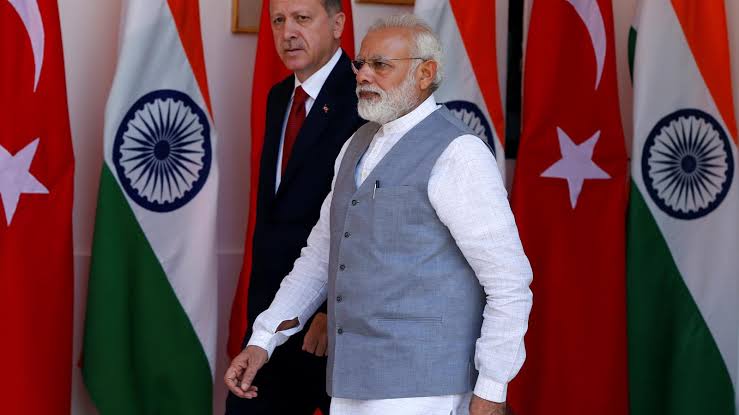 Mustafa Kemal Ataturk was the founding father and the first President of the Republic of Turkey. As President, he served from 1923 until his death in 1938. Ataturk is widely famous for his series of sweeping progressive reforms that made Turkey a secular, modern society.

After coming to power, he set up extensive railway networks and state-owned factories all across Turkey. He also passed laws that ensured women’s suffrage and gender equality.

His religious reforms abolished the centuries-old Islamic Caliphate system and separated church and government. His reforms put a ban on religious educational institutions, prohibited women workers from wearing headscarves in public places and lifted the ban on alcohol.

His liberal foreign policies helped Turkey build close relations with Western countries and also opened doors for it to join the North Atlantic Treaty Organisation in 1952.

But now, Turkey has President Recep Tayyip Erdoğan who is going in the opposite direction. He is the leader of the Justice and Development Party (AKP), a party that wants to assert Turkey’s Islamic identity.

Erdogan, with the unanimous support of the public, wants to make the country openly religious and conservative. Erdogan has begun to replace Ataturk’s secular and progressive laws with more religiously conservative ones.

The recent conversion of the most popular tourist attraction in Turkey, the Hagia Sophia museum back into a mosque is his hallmark. Erdogan’s action was a part of his plan to re-Islamise his country.

Hagia Sophia as a museum used to symbolise the values of secularism and modernity. But now, after being converted into a mosque, it will greatly undermine secular values.

These anti-secular policy decisions of Erdogan administration clearly show his intentions to turn secular Turkey into an Islamic country and become the new Caliph of it.

After the death of Ataturk, for 5 decades, Turkey was constantly in a state of disorder. Turkish military-led coups in 1960, 1971, 1980 and 1997. This instability left the country in a poor state.

In the 90s and early 2000, Turkey had a stagnant economy, the GDP growth was slowed down, unemployment rates were rising and Turkey was seen as a corrupt country where the government didn’t function.

But in 2002, Recep Tayyip Erdogan became the Prime Minister of Turkey and things started to change. He pulled the country’s economy out from the woods by giving more opportunities to the local entrepreneurs and by expanding access to foreign markets. This led to a sharp rise in the GDP and inflation rates plunged. His successful governance even prompted his country’s efforts to join the European Union (EU).

These made Erdogan widely popular among the Turkish population and in 2014 he was elected the President of the country, which in Turkey was more of a ceremonial role with only limited real powers. But the military’s coup attempt in July 2016 gave him the chance to become more popular than ever.

This failed coup attempt led to the “Referendum 2017” in which Turkey had narrowly voted “yes” on a referendum that approved amendments that gave sweeping powers to the hands of President Recep Tayyip Erdoğan.

All these developments within Turkey’s political atmosphere prompted concerns that Erdoğan was becoming more authoritarian and later on his misuse of power for achieving personal ambitions proved these concerns to be true.

Turkey is a member of NATO since 1952 and for decades its membership has been seen as a stabilising force between the Middle East and the Western world. But 21st century’s Turkey, under the leadership of Erdogan, wants to be a more assertive power. Its interests today are in both Mediterranean and Central Asia and those interests may not sit comfortably with its role in the North Atlantic Treaty Organisation.

This clash of interests between Turkey and the West has created a lot of heat in the past few months and has made NATO leaders think about Turkey’s membership in the alliance. At the centre of these tensions is a sophisticated Russian Air Defence System (ADS) the S-400. Turkey signed this deal worth $2.5bn with Russia in 2017, and despite repeated warnings from the U.S., it started receiving the deliveries in 2019.

Because of this purchase, negative impacts on its NATO membership seem to be imminent. Turkey has been expelled from NATOs most ambitious project to build a 5th generation fighter jet, F35 designed for use throughout the alliance and also two U.S. senators have called for sanctions on Turkey as the tension rise between Ankara and the members of the military alliance.

Apart from these, recent tensions between Turkey and Greece which is also a NATO member has dented Turkey’s image in the alliance beyond repair. Also, challenging France (another NATO member) in the Eastern Mediterranean is only exacerbating Turkey’s current state of affairs. The tensions between these NATO members are the by-products of the overlapping maritime goals, Turkey’s adventurism and megaphone diplomacy.

“Due to all these increasing tensions between the NATO members, it will be interesting to see if the alliance built for fighting the Cold War can cope with its members’ ambitions in the 21st century and can their interests be reconciled.”

“Turkey’s self-seeking attitude & exploitative approach in the energy-rich eastern Mediterranean Sea has given rise to new economic and military power struggles among the countries of that region.”

The recent change in Turkey’s West Asia approach strongly suggests that now Turkey’s interests are no longer confined to its borders. Turkey has been showing unparalleled interest in the Mediterranean, starting with Turkey signing an agreement with Libya’s UN-recognised government, which claimed extensive areas of the Mediterranean Sea for Turkey.

With the recent findings in the region, eastern Mediterranean has become an energy hot spot for the Mediterranean powers in recent years, and Turkey’s push to secure a share of the resources in those waters has only worsened strains in an already treacherous region.

In early 2020, Erdogan’s administration has given new exploration licenses to one of its state-run oil company, TPAO, to conduct drilling in the Mediterranean Sea. Turkey has recently deployed its exploration ships under the protection of its navy and air force in the exclusive economic zone of Greece and Cyprus. Turkey is preparing to expand its exploration and drilling activities for oil and gas closer towards the island of Cyprus and Greek island of Crete.

Turkey’s aggressive posture in the Eastern Mediterranean and the drilling for oil and gas in waters internationally recognised as belonging to Greece drew some serious criticism this year.

In UNGA 2020, the leaders of Cyprus, Greece and Armenia heavily criticised Turkey for its illegal drilling activities, gunboat policy and being a threat to the entire Mediterranean region.

But President Erdogan’s disruptive foreign policy is not limited to the Mediterranean only, in the recent border conflict between Armenia and Azerbaijan over the disputed territory of Nagorno-Karabakh, Turkey’s involvement changed the whole power balance of the Caucasus region.

Turkey, backing for Azerbaijan in the war, providing it weapons and mercenaries, is another demonstration of President Erdogan’s ambitions to turn Turkey into more than just a regional power.

By promoting regional war, selling weapons and going against western powers like the U.S. and France has greatly helped Turkey in increasing its regional influence.

Erdogan has dragged Turkey into the list of India’s enemies by growing hostility towards India both inside the Indian territory and at various international platforms.

No matter how hard Erdogan’s foreign ministry tried to convince the Modi Administration in his 2017s visit that their bilateral relation with India is independent of their relationship with Pakistan; it is not a fact.

Previously secular Turkey has now been turned into a state where a morally and financially corrupt leader turned dictator — Recep Tayyip Erdoğan, approves all political moves of the regime.

His new geopolitical ambitions are the fundamental reasons why India’s relations with Turkey have been deteriorating steadily in recent times. Erdogan’s administration has been found interfering in the internal matters of India which are very much politically sensitive.

Starting from Turkey’s support to Pakistan on the issue of Jammu & Kashmir, opposing India’s bid for the membership of the Nuclear Suppliers Group (NSG), slamming India at UNHRC and OIC to raising questions at the United Nations General Assembly (UNGA) on India’s abrogation of the Article 370, Turkey has done enough to get recognised as an enemy to India’s sovereignty and national interests.

On the other hand, whether it is the matter of Kashmir, terror-financing, money laundering or backing Pakistan at the FATF, the traditional ally of Pakistan, Turkey is seen to be standing firmly behind it on almost every single issue.

Turkey’s open support to Pakistan on the issue of Jammu & Kashmir is a part of a bigger plan to counter the influence of Saudi Arabia. Turkey and Saudi Arabia are rivals of the Islamic world where Turkey wants to replace Saudi as the Muslim leader. By backing Pakistan and by being the voice for the Kashmiris, Turkey hopes to gain popularity in the Islamic world.

But this is not all that Ankara has been doing. An intelligence report from last year accused Turkey of making efforts to recruit Fundamentalists and radicalise Indian Muslims.

Turkey has now emerged as the hub of the anti-India activities next only to Pakistan. According to the report, most of these efforts are mainly directed by Turkish state media, religious educational institutions and non-profit organisations.

Another similar report stated that the Turkish government has been providing lucrative scholarships and running student exchange programs for Kashmiri students and Indian Muslims to study in Turkey through state-sponsored NGOs.

Once the students land in Turkey, they are approached and taken over by Pakistan’s ISI officials working in Ankara.

The latest developments between Turkey and Pakistan have brought dramatic changes into the geopolitics of the South Asian region. Ankara has now moved completely to side with Islamabad against India which has shaken the balance of power between the two traditionally rival countries.

The report also accused the Turkish embassy in New Delhi of forging an alliance with different Indian NGOs and encouraging local activists to speak against India and serve Ankara’s agenda.

Ankara has also been found building a nexus of Pakistan, Turkey and Malaysia, that challenges India’s sovereignty and national interest. So, now it is time for India to send a clear message that it does not like Turkish interference in its internal affairs.

Turkey’s growing footprints all over the world is a matter of serious concern as it deeply threatens the peace and stability of different regions by disrupting the power balance between rival countries. International organisations and democratic powers like the U.S., France and India should give this matter utmost priority and keep Turkey’s growing military and political influence under constant check.