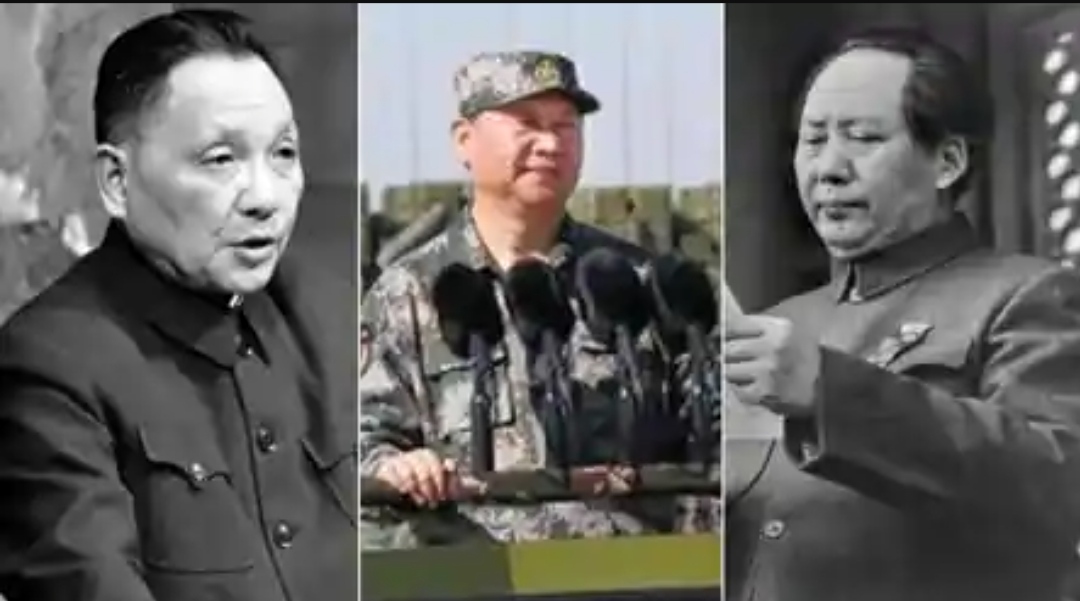 A plethora of agreements and protocols have been signed to maintain peace and tranquillity on the 3488 km Line of Actual Control (LAC) with China. After the Special Representative dialogue was set up between India and China to resolve the boundary issue in 2005, 22 meetings have taken place between India’s National Security Advisor and Chinese State Councillor but the boundary issue has hardly moved towards resolution. (From Left to right) Chinese paramount leaders Deng Xiaoping, Xi Jinping and Mao Zedong. India never agreed to make concessions to its either Western or Eastern borders despite Chinese leaders exerting their pressure

Although the People’s Liberation Army (PLA) under Commander-in-Chief Xi Jinping wants to expand the territorial map on the basis of Green Line defined by a 1959 map circulated by Prime Minister Chou En-Lai under leader Mao Zedong, the Chinese position on resolving the border issue with India has changed over the decades as per convenience of the ruler of Beijing.

After Mao Zedong changed the facts on ground by building the Lhasa-Kashgar highway (number 219) through Aksai Chin in 1956, Prime Minister Chou En-Lai in 1960 offered his Indian counterpart Jawaharlal Nehru to resolve the border on “as it is where it is principle.” This meant that China was recognizing Indian sovereignty over Arunachal Pradesh or North-East Frontier Agency as it was known then, while India would recognise Beijing’s claim to Aksai Chin south of Haji Langar pass. This was never accepted by India and was one of the most important reasons behind the Chinese aggression in 1962. Today, China is in adverse possession of more than 38,180 sq km of Indian land including 5180 sq km of Shaksgam valley gifted by Pakistan in 1963.

On February 14, 1979, then Vice Premier and later paramount leaders Deng Xiaoping met Foreign Minister (later Prime Minister) Atal Behari Vajpayee and offered a package deal for resolve the boundary issue. Deng said that Chinese were willing to make concessions on the eastern sector to India, while New Delhi should make similar concessions in the western sector. While the concessions were not specified, Deng said that the resolution of the border could be shelved to the next generation as long as both sides maintain a stable situation on the border. Deng reiterated this proposal in 1985 also.

The Chinese position again took a radical turn after the 1986 Somdorong Chu incident in north Arunachal Pradesh. In 1987, Chinese Vice Foreign Minister Liu Shuqing told his Indian counterpart Secretary (East) A P Venkateswaran in New Delhi that China was looking for concessions both on eastern and western sectors in order to solve the boundary issue. Deng was the leader of China and Chairman of the all powerful Central Military Commission.

Since then a plethora of agreements and protocols have been signed to maintain peace and tranquillity on the 3488 km Line of Actual Control (LAC) with China. After the Special Representative dialogue was set up between India and China to resolve the boundary issue in 2005, 22 meetings have taken place between India’s National Security Advisor and Chinese State Councillor but the boundary issue has hardly moved towards resolution. China still calls Arunachal Pradesh South Tibet and India boundary in Ladakh claims all of Aksai Chin.

While there is hope that the present stand-off between PLA and Indian Army may result in at least exchanging of maps in western sector so that each side knows the other’s positions and claims, the Chinese belligerence and deliberate provocation from Depsang to Pangong Tso this year does not augur well for peace.