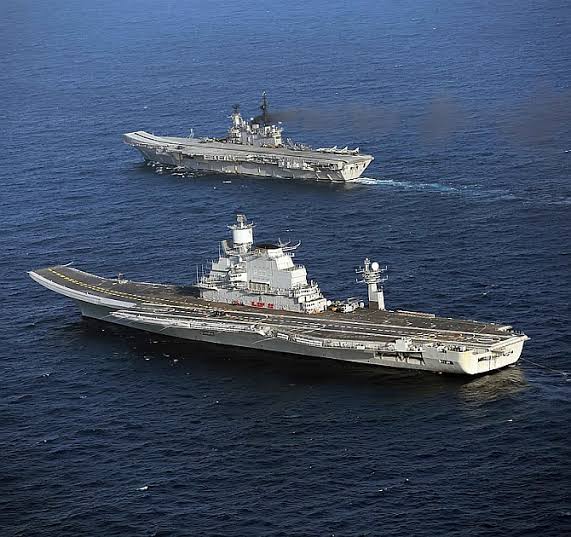 While the ships are meant for anti-piracy operations, the deployment comes as the PLA likes  to project to other littorals regarding its dominance in the IOR even as tensions run high between India and China along the Line of Actual Control in Ladakh. Though whole world is fully aware including China that this Task Force stands no where against the Indian Navy and the IAF .

The defence and security establishment  have confirmed the  entry of the Task Force in the IOR. However the sources refused to comment if the Chinese deployment is being tracked, but said the Indian Navy keeps a close watch on waters around India.

India  too has shown its  reach and ability not only the IOR but also in the Natuna sea , south of the Chinese Coast line . New Delhi asserts itself as the next security provider in the IOR and soon in the Indo Pacific .

On Monday, Chinese state media Global Times reported that a PLA Navy vessel escorted an Indian oil tanker carrying 31 crew members to a designated sea area in the Gulf of Aden.  Escort services are provided by all navies operating in the region, including Indian Navy, but the Chinese sought to play this up in what was seen as China’s projection about its ability and presence in the region. Though every country in the region is aware of the hollowness of the Chinese claim .

“Therein lies the difference between a hegemon and a status-quo maritime power like India. While the Indian Navy has been protecting maritime trade in the Indo-Pacific without consideration of Flag-State or nationality, the CCP (Chinese Communist Party) Navy only senses opportunities to threaten global oceanic trade,” a source said.

Immediately after this, the Indian Navy was reported to be tracking  the Chinese research vessel. Yuan Wang, a satellite tracking vessel, had entered IOR from Malacca Straits in August. The ship was being constantly monitored by Indian Navy warships and the P8I long range maritime aircraft deployed in the region.

The sources said the Indian Navy keeps a close watch on all warship movements in the IOR, especially of the Chinese.

Amid the ongoing stand-off in Ladakh, the ‘silent service’ of the Indian armed forces has been making deft moves in the maritime sphere, said the sources.

It was reported in July that a large number of ships under the Eastern and Western Naval Commands were deployed in the IOR to send out a clear “message” to China.

“Late August, reports said that Indian Navy’s warships were now present in the South China Sea, a subtle yet significant change in India’s maritime posture vis-à-vis China. This change in operating philosophy showcases the graded approach being applied by the government, and was reinforced during Defence Minister Rajnath Singh’s statement in Parliament this Tuesday — seek peace, while displaying resolve,” said a source.

As the reports of Indian warships in South China Sea came, Global Times carried an editorial claiming India was looking to distract China’s attention from the border issue by exerting pressure on the high seas. It added that escalation in the South China Sea by the Indian Navy could not be ruled out.

The sources explained that the Indian Navy has been following its new stratagem of Mission Based Deployments since 2017, which entails deployment of combat-ready warships extending to the far reaches of the IOR.

Citing recent examples of India’s reach and ability, the sources pointed out that in the month of September itself, Nireekshak, a deep-diving mission vessel was deployed in Mauritius to assist in salvage of MV Wakashio. Guided-missile destroyer Ranvijay and fleet tanker Shakti also undertook complex maritime exercises (INDRA-2020) with Russian Navy warships in the Bay of Bengal over a period of two days.

“Sahyadri, a stealth frigate has been operating off the coast of Sri Lanka to assist in salvage of very large crude carrier MT New Diamond for the last two weeks while Talwar, a stealth frigate undertook fuelling from a US Navy fleet tanker Yukon whilst Mission Deployed in the Northern Arabian Sea,” said the source quoted above.

“In addition, the Indian Navy has also stated that it continuously maintains presence of a warship in the Gulf of Aden for anti-piracy patrol and in the Persian Gulf for Op Sankalp (protection of Indian-flagged merchant vessels),” the source said.

The gravity of these deployments is not lost on the PLA Navy, which is aware that India’s central position astride the main International Shipping Lanes accords distinct advantages.