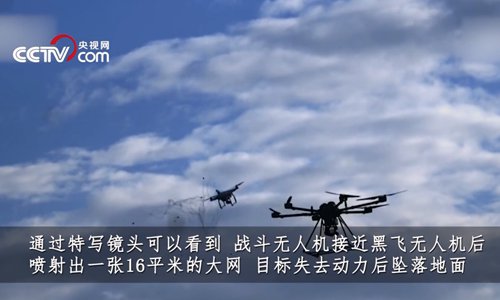 A Chinese hunter drone shoots a 16-square-meter net at another drone, effectively bringing it down from the sky.

The hexacopter drone made by a research center under the China Aerospace Science and Industry Corporation is capable of approaching a hostile or illegal drone and firing a 16-square-meter net at it, China Central Television (CCTV) reported online on Tuesday via a column on military affairs.

Caught by the web, the hostile drone should lose power and fall to ground.

The net can be autonomously launched by the drone hunter, the report said, without disclosing the type of hunter drone.

It is also a part of China’s interception system against small, slow, low flying targets, CCTV reported, noting that the drone can work together with land-based rocket launchers and radars.

“Small, slow, low-flying aircraft are difficult or cost-inefficient for traditional air defense systems to intercept,” a military expert who asked not to be named told the Global Times on Wednesday.

“As drones become more popular and common, they bring about more security threats.”

The expert noted the drone can conduct surveillance, reconnaissance and bombardment missions not only in battle, but also in non-combat areas.

In August 2018, two commercial drones carrying explosives detonated in a failed assassination attempt on Venezuelan President Nicolas Maduro when he was delivering a speech, the New York Times reported.

The hunter drone and detection devices can reduce such threats, the expert said.

US drone company Airspace Systems also made a drone capable of capturing other drones by shooting a net, US media outlet Popular Mechanics reported in 2016.