China should not blithely ignore US overtures to India 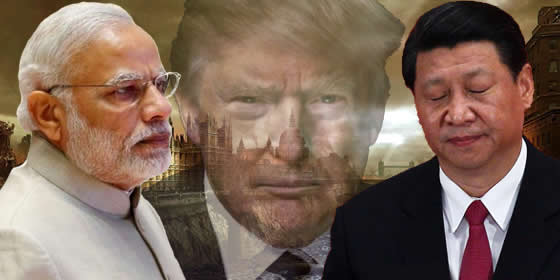 US President Donald Trump will pay a two-day visit to India on Monday and Tuesday, becoming the seventh – and the fourth consecutive – US president to visit the South Asian country. This visit shows the importance Washington attaches to the geopolitical position of New Delhi, as the US spares no efforts in wooing neighboring countries of China to reach the goals of its Indo-Pacific Strategy.

Some Chinese people for a time didn’t attach enough importance to the US Indo-Pacific Strategy, taking for granted that the strategy would end up in vain. However, it is the strategic focus of the US and Washington has never given up on its efforts to contain China, particularly after adjusting its strategies against China. Hence, Beijing must pay sufficient attention to it.

The US labels China a “rival power,” and this won’t change in the near future. Many US moves in recent years have been based on such positioning.

The US has had a clear strategic definition of India and realized all-round cooperation with it – in an attempt to boost ties with the South Asian giant and thus neutralize China’s influence in the country and in the region.

India practices a policy of non-alignment and it is unlikely to make an alliance with the US. However, there is discord in India-China relations with many Indian people vigilant toward China, so in the current context, if China-India ties cannot move on, the US will take the chance to exert more influence on India and make New Delhi increasingly reliant upon Washington.

Take the military sphere. According to a BBC report, “Defense trade is widely seen as the silver lining in this relationship – US-India defense deals have ballooned in the past decade, from nearly zero in 2008 to a little more than $15 billion in 2019.”

Some analysts believe arms sales are one of Trump’s goals in his visit to India. However, the US doesn’t merely want to make money. Although Trump is a real estate tycoon, he doesn’t care about petty gains but aims at reshaping global relations, which is part of the US Indo-Pacific Strategy.

Such a situation is undoubtedly detrimental to China, which needs stable surroundings for its peaceful development. In this case, India’s steps are worthy of China’s attention. The US doesn’t care much about contradictions with India – different from its comprehensive adjustment of policies toward China – as the US has never seen India as a competitor, merely a tool to balance Asia.

Washington’s core interest in its relationship with New Delhi is to contain Beijing. Therefore, despite a tariff war between the US and India, Trump warmly welcomed Indian Prime Minister Narendra Modi in September 2019 in the US state of Texas. And Trump is expecting a “raucous welcome” in India.

Some media believe it unlikely a trade agreement “between the US and India will be inked during this visit.” But Trump’s visit should not be simply taken as a political show to appeal to his ego – although it may look like one.

The international situation is undergoing a major change, and this transition is still ongoing. Hence China cannot take the altered circumstances for granted.

It is not that important whether Trump inks some deals with Modi during his visit. What matters is what his trip will bring to the strategic situation. China should see through the visit and pay more attention to the long-term US strategy.

Only by grasping the changes in the strategic situation in time can China be prepared to respond before any change really happens.