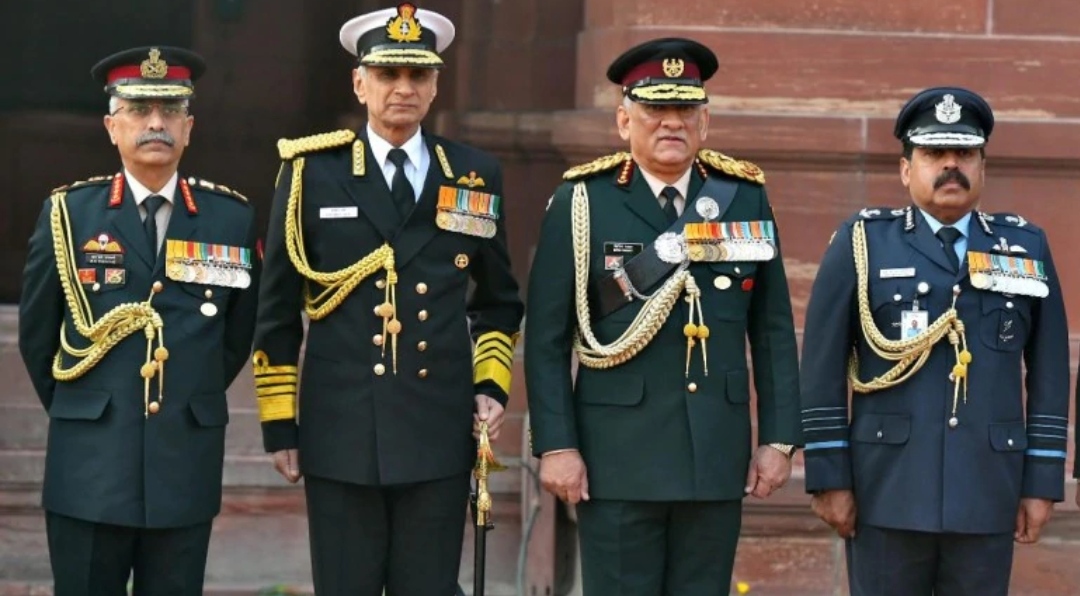 The CDS General Bipin Rawat rightly Cleared all doubts and confusion over Defence Secretary and Chief of Defence Staff (CDS) responsibilities by stating that secretary has his own charter of works and CDS has its own. This was stated at Times Now Summit 2020 in New Delhi.

What he should have clarified that this Civil control is to be exercised by duly elected political authorities who are constitutionally entrusted with this responsibility ie the Raksha Mantri, the Prime Minister and the Cabinet Committee Security. Of course the President as Supreme Commander will always be there to provide guidance.

What had happened that through the years, this control had been wrongly usurped by the bureaucracy with not much resistance by the military. Now the creation of the Department of Military Affairs has been the right step to carry out a Course correction. This will now remove bureaucratic interference by civil bureaucracy into matters military. DMA will also provide direct interface between the military and the political authority. To enable CDS to manage the Higher Directions in matters Defence in a more structured manner, the CDA needs to be provided with a Lt General rank as Secretary DMA.

The CDS basically should be looking at jointness, integration and ensuring that the priorities for procurement are laid out correctly so that all the three services — Army, Air Force and Navy — move ahead without one service trying to beat the other in procurement system.

On being criticised for making statements with political overtones, General Rawat said that all service personnel should be politically aware. “We are also expected to cast our votes. We have right to the franchise like any other citizens of this country. Therefore, whom do I vote for if I am not politically aware.” He forgot to add that War is continuation of Politics by other means and so political awareness is a neccessity.

He also said that there is a fine line drawn for remaining away from politics and being politically aware. “These two are separate issues which often get mixed up,” he said.

Talking about Indian borders with China and Pakistan, he said the priority is always to defend borders. “Defence of our border can be better achieved through synergy, integration and jointness. We cannot forget that we are facing a proxy war,” he said. He also said that Indians have to be prepared for defence of border, island territories, and peninsula in the South. “We have plans to deal with anything happens on our western and northern borders. Remain prepared for both the contingencies…Future is unpredictable,” he asserted.

At the summit, speaking on the topic “Towards a Stronger India”, General Rawat touched various issues.

“Our Prime Minister has laid down the vision statement for the coming decade. And therefore it is for all of us to create conducive external and internal environment for unhindered and inclusive growth development of our nation in line with the vision statement,” he said.

General Rawat said that contemporary world could best be defined by existing contradictions that lie ahead in given time.

“While democratic institutions economic interdependence and globalisation are growing stronger, there are revisionist forces which want to push the world into conflict and chaos,” he said.

India”s top military head said that a global outreach through multilateral fora and strategic partnerships for economic development continue to signify India”s interest and recent trend emphasise that the era of conflict is far from over.

“The spectre of terrorism as it relates to our region, the epicentre here continues to be Af-Pak (Afghanistan and Pakistan) region with organisations like al Qaeda, Daish, Taliban, ISIS, Jaish-e-Mohammed, Lashkar-e-Taiba being some of the very prominent groups that continue to disrupt humanity,” he said.

He stressed that India also gets impacted by developments beyond its immediate neighbourhood and in Indian Ocean Region.

“We are concerned about developments in West Asia and Central Asia because they do have direct bearing on India”s national interest. Therefore towards building a stronger India we have ensure comprehensive security in terms of our economic development, looking it at our cyber security, space food, community development and environmental, personal, health and education issues,” General Rawat said.

However, he pointed out that none should forget the relevance of security through a strong military. “The global security environment and its impact on India”s defence and security therefore comprise numerous seamlessly interconnected issues,” said General Rawat.

“Notwithstanding our regional and global endeavour towards peace and stability, threats and challenges will always remain,” pointed General Rawat, adding that the need to address consequences on instability and volatility remains a key priority for India.

“India has increasingly come to occupy a new role in the new world order as a confident and articulate power. In the context of global peace, India needs to fulfil a larger responsibility which reflects the resolve of more than a billion people that inhibit our country,” he added,

He said that India must not remain contain to merely reacting to international developments but frequently must act and shape if necessary initiate them.

“Strategic autonomy is our quest and balance development and security is our future,” he pointed.

General Rawat said: “Today in the armed forces we are at the cusp of transformation wherein we are now beginning to evolve structures and processes to meet the challenges post posed by traditional warfare be it on land, sea or air and also into the expanded domain of cyber and space. Not to forget the electromagnetic spectrum which we need to address.”

The CDS stressed that to meet the emerging threats, integrated force structure need to evolve. “We in the services are clear; jointness among the three services is the need of the hour. The faster, the better,” he stressed.

The CDS said that if India is prepared and strong it should be able to get a rightful place in the community of nations. “United Nations Reforms for global peace and development is a must and India must become an important stakeholder in the future reforms that may happen in the United Nations Security Council,” General Rawat added.