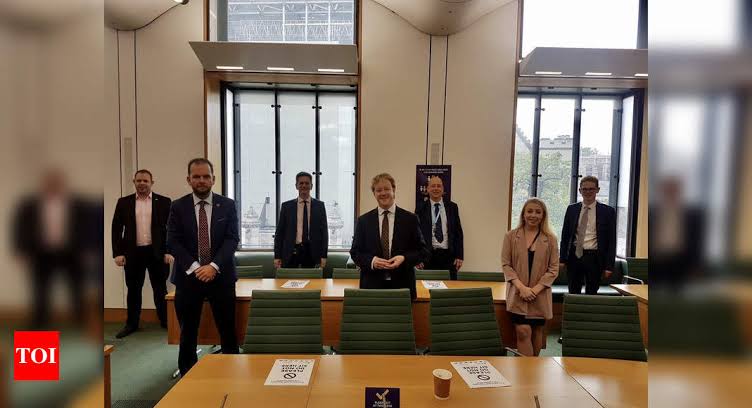 Recently, a group of seven Members of Parliament (MP) from UK’s ruling Conservative party re-launched ‘The Conservative Friends of Kashmir’, which on its Twitter handle defined “self-determination in J&K” as its agenda.

“We have relaunched. We campaign for self-determination and an end to human rights abuses in Jammu and Kashmir. There is growing support for our cause amongst Conservative MPs and activists. Follow us and our work!” the tweet read.

These seven MPs are doing YEOMAN SERVICE to their own forcibly concocted country. There is no country as UK ….it is occupied Scotland, occupied Northern Ireland, occupied Wales and of course the Occupiers England.
So rest of the British Parliament, if they want good relationship with India should just throw out these MPs out of the Parliament or be ready to be revered as above everywhere and every time.
We Indians are now fed up of such friends if Pakistan and will hence forth retaliate in a very harsh manner.

Responding to a letter written by Kuldeep Singh Shekhawat, President, Overseas Friends of BJP, objecting to the launch of the group, Conservative Party denies any affiliation saying, “This group is not an official or affiliated Conservative Party group and is not formally recognised in any capacity.”

Responding to party’s statement, Shekhawat said, “This is a very clear message that Conservative Party is not associated with these kinds of fake narratives, created at the behest of ISI. Party wholeheartedly supports GoI’s [Government of India’s] stand of non-interference by anyone in India’s internal matters. We are pleased by this official confirmation by the CCHQ.”

Around 83 organisations representing various groups of British Indian diaspora had also written a letter to the Conservative Party chairman, copying it to British PM Boris Johnson, Home Secretary Priti Patel, raising their disappointment and objection to the re-launch of ‘Conservative Friends of Kashmir.’

The letter from the organisations called for immediately disbanding of the group.

The letter from the British Indian diaspora read, “We would like to bring this to the notice of the Conservative Party leadership, that @CFoKashmir and its objectives seem nefarious and is seen as directly meddling in the affairs of the Indian sovereign territory. The UK’s position concerning Jammu and Kashmir has always been clear and consistent and that it is a bilateral issue to be peacefully resolved between India and Pakistan. The UK and its political parties have no locus standi on interfering in the territorial disputes/issues of the sub-continent.”