Corporatization of Ordnance Factory Board To Boost Defence Production 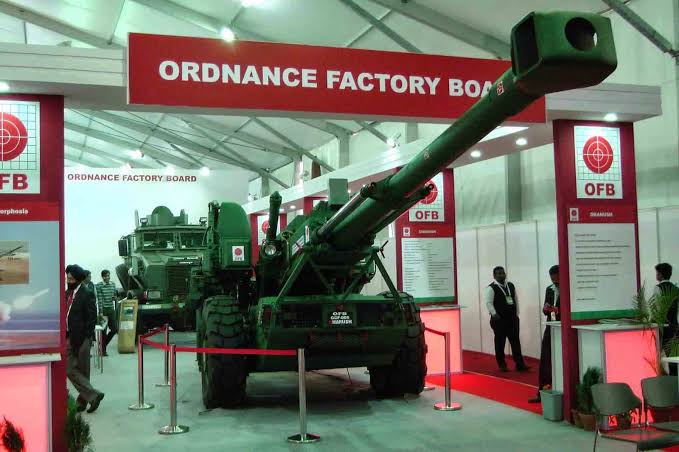 The Ministry of Defence has decided to convert the Ordnance Factory Board (OFB) into multiple companies. The proposal, will be placed before the Cabinet Committee on Security (CCS). It is likely to constitute a six-member Empowered Group of Ministers (EGoM) headed by defence minister Rajnath Singh to implement the proposal.

The EGoM, as per the proposal, will also include the home, finance, law and justice, labour and employment ministers, and, the minister of state for personnel, public grievances and pensions. The EGoM will oversee and guide the entire process including transition support and redeployment plan of employees while safeguarding their wages and retirement benefits.

The Ministry of Defence (MoD), has prepared its proposal to corporatise ordnance factories and it firmly believes that the proposed move, which comes in the backdrop of consistent issues pertaining to the 41 factories, will help enhance functional autonomy, efficiency and unleash new growth potential.

The reorganization will ensure that the transformation of OFB into proposed companies would target unleashing a new chapter of growth. Among its goals are: To increase turnover from Rs 14,000 crore at present to Rs 30,000 crore by 2024-25; To export 25% of their turnover in the same period and to enhance self-reliance on technology from about 20% of the value of OFB production to 75%.

However, the unions — All India Defence Employees Federation (AIDEF), the Indian National Defence Workers Federation (INDWF) and the Bharatiya Pratiraksha Mazdoor Sangh (BPMS) who have been taking the nation for a ride all these years now argue that arbitrary decisions without proper consultation with stakeholders are cause for concern.

Accordingly all the employee unions associated with the ordnance factories have called for a massive protest from August 20 against the move. The employee unions, on Tuesday met with Saurabh Kumar, chairman, Ordnance Factory Board (OFB), and have already sent strike notices to the government.

The News Agency was the first to report that the ministry was actively considering corporatising ordnance factories, on July 19. Post that, the MoD has prepared its proposal on July 23, according to which, the move comes in the backdrop of growing quality and cost concerns too.

“Concerns have been raised by Armed Forces over the last few decades, regarding the OFB, These concerns inter alia, relate to high costs of its products, inconsistent quality, and delays in supply,” the MoD maintains.

AIDEF general secretary C Srikumar, told TOI: “All of us are onboard with the strike, we have already held several demonstrations. Besides, we’ve also written to the Indian Ordnance Factories Service association to back the agitation.”

The employees claim that MoD’s move is in violation of previous assurances given by the ministry and the Centre’s submission in the Parliament in the past that there would be no such decision. “All along they kept telling us there is no such move and in a very non-transparent way, they have suddenly proposed this,” Srikumar said.

Well the days of seeking accountability have come and now change for the better is inevitable.