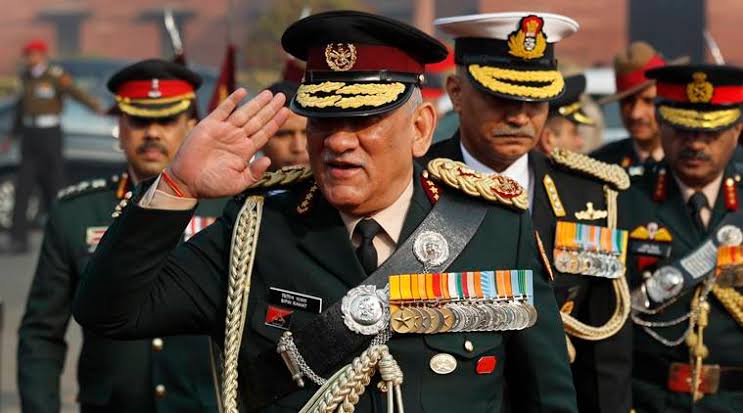 Just like the word SECULIARISM which got twisted by vested politicians, the word CIVIL CONTROL OVER MILITARY also got distorted by lazy politicians.In recent times rectification has been initiated to have a balance in both. Naturally there will be a lot of resistance for status quo.

In a democracy, Civil control over the military means institutionalized over all control of the Higher Defence Organization by the duly elected and appointed political authority. However in India over a period this role had been taken over by the bureaucrats of the Ministry of Defence.

Their main facilitator for this take over was the fact that there was no day to day interaction / advice by the Chief Of Staff and the Principal Staff Officers to the Raksha Mantri or the PM or the Cabinet Committee Security on matters military. Then what was the main idea behind downgrading the COMMANDER IN CHIEF to a CHIEF OF STAFF ?

The need to have a CDS had been debated for long since last 60 years, at various levels and with varying levels of intensity. It was recommended as a Immediate Must by the Kargil Review Committee and later on by Naresh Chandra Committee.

However for reasons best known to the three Indian Cabinets of three successive Governments, the creation of the post of CDS kept getting postponed. As a half hearted measure HQ IDS was created. Also as a tokenism, nomenclature of the three Services HQ was changed to Integrated HQ Ministry of Defence.

Instead of taking the battle to its conclusion, Our Forces accepted the dispensation and made the most of what was available. Within the laid down parameters, thanks to some of the Chiefs of Staff of HQ IDS, notable among them Lt General H S Lidder and few others, HQ IDS took effective steps towards better tri Services integration and give shape to Higher Defence Management.

Finally a resolute government led by PM Narendra Modi and Raksha Mantri Rajnath Singh took the most significant defence reform by creating not only the post of Chief of Defence Staff but also carving out the Department of Military Affairs within the Ministry of Defence.

PM had announced the decision to create the post of Chief of Defence Staff not from his office but on 15 August 2019 from the historical Red Fort thus implying its unique significance. In a way it was a forecast of better things to come.

Thus when the creation of the CDS was announced on 24 December it came together with the real governmental power attached with it. The creation of a Department of Military Affairs (DMA), clearly showed that now it was the Prime Minister who called the shots in Lutyen Delhi.

The creation of DMA has also indicated that there was no rush to just carry out some reform but a very carefully thought through Plan to institutionalize direct interaction between the Cabinet Committee Security, PM and the Raksha Mantri on one side with the Chiefs of Staff Committee, CDS and the Services Chiefs on the other hand, on continuous basis.

Modi led Government in its first term itself had talked of defence reforms but probably refrained from taking hasty steps. By second term the PM must have realized that in international affairs even when you talk softly, you still needed to carry an effective Stick.

Internally also he must have realized that defence forces remain one of the few institutions that are still effective. Of course Doklam, Balakot, Surgical Strikes, wiping out terrorism, defence expenditure etc must have speeded up this defence reform.

The talk of creating the CDS had commenced in earnest right after the 1971 War but the work to sabotage the process too commenced with immediate effect from not only the Civil side but even the military. Finally it seemed that every one had reconciled to the theory that eventually HQ will get a head in the form of a toothless Permanent Chairman of Chief Of Staff Committee.

The announcement of the post of CDS by the prime minister’s office did come as a surprise because of its clarity on most of the things that mattered — the CDS though still a four star General was not going to be mere equal, his relations with the Services Chief would be similar to what PM has with his Cabinet (where in democracy every member is equal). This came not because CDS is going to be the Permanent Chairman of the Chief of Staff Committee but because of creation of the Department of Military Affairs.

The DMA is going to be a new organisation in the sense that instead of just posting military officers in existing MoD set up as Joint Secretaries, Directors and Deputy Secretaries, there has been a very remarkable restructuring. Through DMA the military will become a part of the Government and not remain as just mere Departments the Government.

A unique thing is that while creating the DMA we have not copied from any other country but done it with our own experience on the subject. Matters purely military have been placed under DMA along with many subjects in the CONCURRENT List (as in Centre & State working …here DMA becoming the Centre). Wisely, the final selection of the Vendor, process of negotiation and purchase will still be dealt by DoD under the Defence Secretary, though what the item is to purchased will be in the hands of the DMA.

Now General Rawat the first CDS has a very important and historical role to play. Indications are that he is a man in hurry. However if the CDS still cares to remember the wise words of a NDA drill instructor of our times …..Josh and Hosh ….both are required with proper balance.

What procedures get established now, will become the norms for future. Remember when PM Rajiv Gandhi was himself also the Raksha Mantri, then till the time Arun Singh was there as Minister of State (in the role of a proper coordinator) things remained honky dory but went into a downward spiral after his departure.

Therefore to ensure that CDS is able to devote proper time to his most important role as Single point military advisor to the Cabinet Committee Security, firstly there is a need to appoint one additional secretary from the military and one Army Commander equivalent military officer as Secretary (coord) in the DMA in order to relieve the CDS from mundane routine.

This role should be given to a VCDS who will also become the fifth member of the Chiefs if Staff Committee (a good idea as many things can be sorted out by voting it out in a democratic manner unless CDS is given veto power).

Thirdly, though the military has fully capable officers to Staff the DMA at all levels with their vast Regimental and Staff experience in contrast to civil Services officers with virtually nil military experience, the bugbear will be the short tenures. In this we need to learn from the US military. Tenures in tri Service organizations will have to be given more weightage for selection to higher ranks.

Selected officers will have to be given at least one tenure in the rank of Lt Col equivalent in the DMA or DoD. Certified domain experts can even be asked to forego even Command and still be moved up the ladder. Eisenhower, Haig or Collin Power never served as Divisional Commanders, even our own Sam Bahadur never commanded an infantry battalion. Once the DMA is fully functional, then staffing of Officers and subordinate staff below the Deputy Secretary level will also need a proper mix.