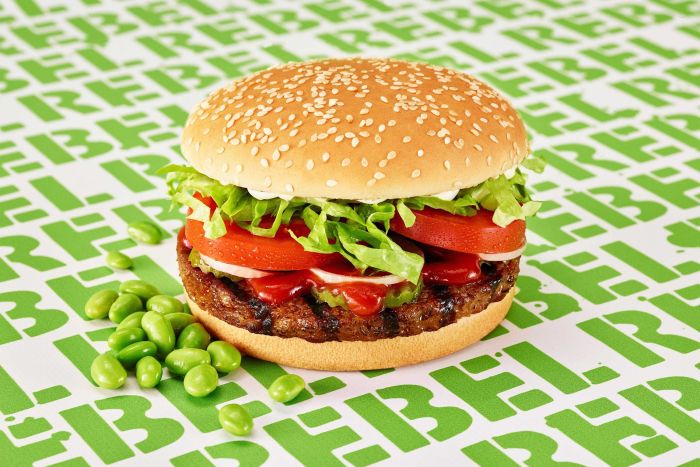 The burger patty used in the plant-based Rebel Whopper aims to mimic the taste and texture of real beef.

Australia’s national science agency, the CSIRO, has teamed up with the billionaire behind an Australian fast food chain to make and market a plant-based alternative to the beef burger, dubbed the Rebel Whopper.

• Beef producers want better labelling on fake meat products, and nutritionists warn they may not be healthier for us

The legume-based burger patty is the creation of plant-based meat start-up, v2food, which is a joint venture between the CSIRO and Hungry Jack’s founder, Jack Cowin’s Competitive Foods Australia.

With the science agency’s help, v2food’s burger patty aims to mimic the taste and texture of real beef and contains added fibre and nutrients.

Some beef producers are calling for meat-related branding to be removed from such products and a public health researcher has cautioned against assuming they are a healthier alternative.

Earlier this year, US-based fast food giant Burger King, of which Hungry Jack’s is a franchisee, began trialling a similar product called the Impossible Whopper and other companies are following suit.

In Australia, the number of meat-free burger products increased by 289 per cent between 2010 and 2019, according to the George Institute for Global Health.

The CSIRO projects the plant-based protein industry in Australia to be worth more than $6 billion by 2030.

However, Mr Cowin said the plant-based protein industry was not an enemy of the existing beef industry.

There are calls from parts of the agricultural industry for more clarity around the labelling of products claiming to be meat or milk.

“We sell 30,000 tonnes of meat and we hope to be able to continue to sell the same amount of beef as we always have,” he said.

“We will attract a different audience that aren’t currently buying products because of sustainability reasons.”

Mr Cowin said “flexitarians”, or consumers who eat both meat and plant products, were an emerging and important market.

Nick Hazell is the founder and chief executive of v2food and he said the impetus for the venture was the world’s unsustainable growth in meat consumption.

“The population is growing towards 10 billion and meat consumption is also growing per capita. When you do the maths, it’s actually impossible for us to feed the planet,” he said.

“It’s not about converting people to veganism and vegetarianism. It’s about giving people who love meat a choice to do something that is a bit better for them and for the planet.”

CSIRO projects the plant-based protein industry in Australia will be worth more than $6 billion by 2030.

Earlier this year, the National Farmers’ Federation (NFF) called for more clarity around labelling products related to milk or meat.

Those concerns were echoed by Tony Seabrook, president of the agricultural lobby group Pastoralists and Graziers Association of Western Australia.

“If they’re going to use the word ‘meat’, they’re actually stealing away the reputation from those who produce real meat,” he said.

Mr Hazell said the plant-based burger patty was marketed as being “better for you and better for the planet”.

“Meat is a valuable source of protein, vitamin B and iron, and if we’re going to replace the meat in a particular meal then we need to deliver all of that.”

However, Curtin University nutrition and public health researcher Christina Pollard warns against the assumption that ‘fake meat’ is healthier than the real thing.

“The problem is that often these products are not healthier than the meat-based original, because they are still heavily processed and high in fat and salt,” Dr Pollard said.

She said consumers should check the ingredients list and nutrient values of meat-free products before buying into their purported health benefits.