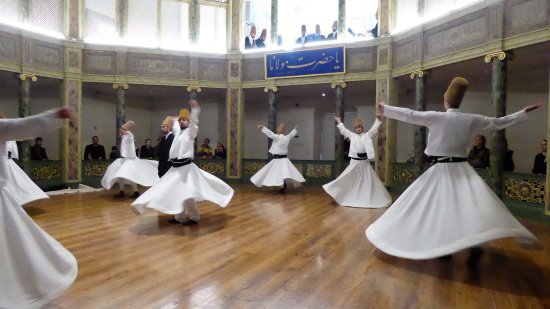 I have had the pleasure of visiting Istanbul twice but, to my deep regret, I failed to witness the dancing dervishes. However, I console myself with the thought that a commercialised performance can hardly be expected to weave the magic of a dervish in trance or spin the spirit of Mawlana Jalal-ud-din Rumi who personally choreographed the first dance of the dervishes.

Rumi (1207-1273) was born in Afghanistan. But when he was still a young boy his father moved his family to Anatolia (Turkey). His father was a scholar and from him Rumi learnt the Quran, Hadith (sayings of Mohammad, as distinct from the Quran which is supposed to be God’s words revealed to the prophet), jurisprudence (Sharia law), and theology.

By the time of his father’s death in 1231, the 24 year old Rumi was already a recognised scholar and popular preacher in Konya, the principal town of the Anatolia region of Turkey. Though young, his knowledge was deep and wide-ranging and his eloquence impressive. He started being called Mowlana, master (the Sufi order that traces its origins to him is thus known as the Mowlavi order).

In 1244 came to Koyna a 60 year old Iranian dervish named Shams of Tabriz. The two met – one a respected scholar-preacher with a wife and family, feted by the cream of Koyna society, the other an unknown and homeless dervish. But such was the exceptional influence of Shams that shortly after this meeting, Rumi was transformed from a mainstream cleric to a committed mystic and passionate poet.

Shams brought to Rumi the message of loving devotion. He ridiculed the traditional preachers of Islam who kept reminding everyone that on the Day of Judgment all human beings would be divided into two groups: those who failed to observe the rules of Islam and would therefore be thrown into the pits of hell; and those who followed the teachings of the Prophet and would therefore be rewarded with exotic fruits, wine and virgins in paradise. So great was the obsession of these clerics with rewards and punishment that they forgot about God!

Shams’ views were unconventional; in fact they appeared as heretical to most in Koyna.

“The sharia is like a candle,” said Shams. “It provides us with much valuable light. But let us not forget that a candle helps us to go from one place to another in the dark. If we forget where we are headed and instead concentrate on the candle, what good is it?”

It didn’t take Shams long to observe that Rumi had a quality that very few theologians have: the ability to dig deep below the husk of religion and pull out from its core the gem that is universal and eternal. Koyna was shocked to see how the vagabond Shams soon became an inseperable friend of the venerable Rumi. The once orthodox Rumi began preaching that instead of an outer-oriented jihad—defined as “the war against infidels”- he stood up for an inner-oriented jihad where the aim was to struggle against one’s ego, nafs.

“The Quran is a gushing river,” Shams taught. “Those who look at it from a distance see only one river. But for those swimming in it, there are four currents. Like different types of fish, some of us swim closer to the surface while some others swim in deep waters down below.

“Those who like to swim close to the surface are content with the outer meaning of the Quran. Many people are like that. They take the verses too literally.

“There are three more currents. The second one is deeper than the first, but still close to the surface. The third undercurrent is the esoteric reading, batini.”

The fourth current is wordless, silent, a stage after which language fails us. This is the zone of love.

To those who chose to explore the depths of the river, religion was far beyond a set of rules. It was communion with God. The ultimate religious experience was an explosion of love.

Rumi endorsed Shams’ view that every time a faithful fell in love, he ascended to heaven; every time he hated, he tumbled straight into the fires of hell. Motivated by neither the fear of punishment in hell nor the desire to be rewarded in heaven, sufis loved God simply because they loved Him, pure and easy.

To develop such devotion the sufi needs to soften inside. For faith to be rock solid, the heart needs to be as soft as a feather. Through illness, accident, loss, or fright, we all face incidents that teach us how to become less selfish and judgmental, and more compassionate and loving. (The wound is where the light enters : Rumi).

We should guard against suffering making us bitter; its role is to make us humbler, gentler, warmer. The only way to get closer to Truth is to expand our heart so that it encompasses all humanity.

The sufis were rebels. They fearlessly preached that nothing should stand between the faithful and God. Not imams, priests, or any other custodians of moral or religious leadership. Not spiritual masters, – not even faith!

Under Shams’ guidance and encouragement Rumi turned from writing religious treatise to devotional poetry and he found himself often transferring his love for god to his teacher! Shams and Rumi would talk late into the night and, drunk with love, the two would rapturously dance in the moonlight in Rumi’s garden. And thus was born the Dance of the Whirling Dervishes.

In 1246 Rumi, in an open-air hall, introduced to the people of Koyna the sema, the dance of dervishes yearning for blissful union. Legend has it that Emperor Kai Khusru himself attended the first performance. Seven dervishes, including Shams, danced to the music of a reed flute called the ney.

Rumi announced, “This, my friends, is called the sema—the dance of the whirling dervishes. From this day on, dervishes of every age will dance the sema. One hand pointed up to the sky, the other hand pointing down to earth, every speck of love we receive from God, we pledge to distribute to the people.”

The sound of the ney represents the sigh of the lover for the beloved. To quote Rumi
Listen to the reed and the tale it tells,
how it sings of separation:
Ever since they cut me from the reed bed,
my wail has caused men and women to weep.

As one reads about the sufis or listens to their music one is struck by the expansiveness of their love and the drunkenness of their bliss. And then we witness jihadists killing innocents just to assert their virility in the name of the same Islam. This reminds me of a line from William Blake’s famous Tyger poem: “Did He Who made the lamb, make thee?”