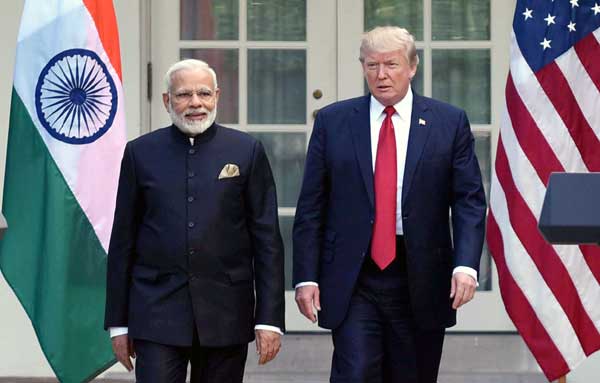 Hours after holding bilateral talks with Prime Minister Narendra Modi, US President Donald Trump very clearly stated that he will mediate between India and Pakistan only if requested by both. A few journalists tried to trap him but he was very clear.

During a press conference in New Delhi on Day 2 of his India visit, Donald Trump was asked what he thinks about the cross-border that India faces from Pakistan. To this he said he discussed the issue of terrorism with PM Modi during his talks with him.

He however added that he is willing to help the two countries and mediate because he shares good equations with the two prime ministers. “If anything I can do to mediate, I will do,” he said.

“We talked a lot about it today. I said I will do whatever I can do to help as my relationship with both gentlemen (PM Modi and Pakistan PM Imran Khan) is so good…Anything I can do to mediate/help, I’d do. They (Pakistan) are working on Kashmir,” President Trump said.

Later in the press conference when he was specifically asked about his mediation offer that he had floated after the Modi government decided to abrogate Article 370, President Trump said, “I didn’t say anything about that (mediation).”

He said Kashmir has been a “thorn in lot of people’s sides” for a long time and there are two sides to every story.
“Kashmir obviously is a big problem between India and Pakistan. They are going to work out their problem. They have been doing it for a long time,” he said.