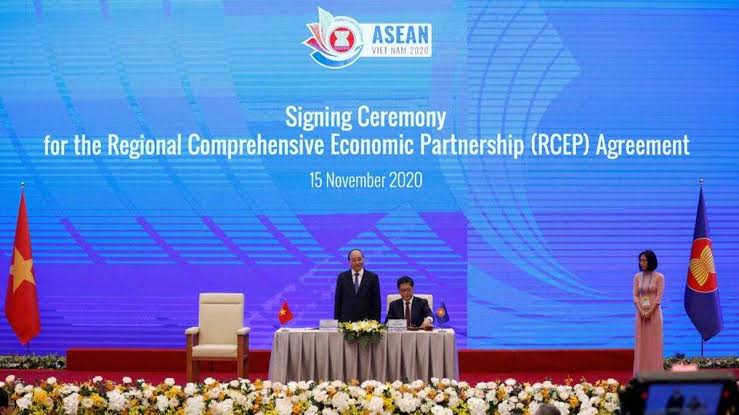 The signing of the Regional Comprehensive Economic Partnership (RCEP), has created the world’s largest free trade zone. However India, US and the EU are not members of this grouping.However where as USA and EU have been excluded, India refused to become a member as a considered decision.

Now it appears to have stoked a sense of urgency for a section in European media. These European media outlets have expressed concern over the possibility that the EU as an economic community could be marginalized by the RCEP. However there is nothing to worry for EU.

They just need to ensure full cooperation with India to become a part of the Pan-Asian industrial chain. India with SAARC and rest of Asia is on its own a vast market. Also India has very close relations with every member of RCEP, except China.

While Europe’s anxiety in the face of the rise of a competitive free trade bloc is understandable. Therefore pursuing closer economic ties with Asian economies and India makes lots of sense. India indeed is a big market, and a good alternative to the free trade bloc of other countries in terms of consumption power or industry chains.

The sense of urgency may better serve as a driving force for Europe to strengthen its cooperation with India and the entire Asian industry chain, and the India -EU Bilateral Investment Treaty could be the best way to achieve its vision.

The India -EU Trade treaty negotiations have been going on, and both sides are trying to complete the negotiations at the earliest. If the bilateral treaty could be reached, cooperation between the EU and the Indian industry chain will be further upgraded, and investment facilitation and free trade between the economies of the EU and India will bring reciprocal benefits for both sides.

If the EU is really serious about its pursuit of closer bonds with Indian and Asian economies, it needs to show reciprocal sincerity, not just anxiety. In the potential investment treaty, the EU needs to grant a fair and open investment environment.

For a long time, strong US influence in Europe has led some in academic and political circles to call for a more independent policy stance. If Europe can strengthen its connections with India in particular and Asia in general in terms of trade, then a more diversified trading network may also give the continent more flexibility in handling economic and geopolitical issues.