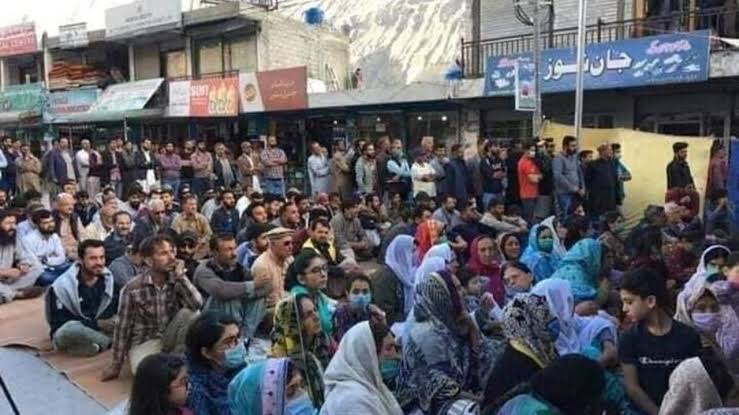 Pakistan has for decades been plundering the region of its money and resources and been giving it nearly zero returns. Demanding for the rights has seemingly become an unwritten crime in Gilgit-Baltistan. Anybody who has dared to raise his voice against this discrimination has been subject to intimidation, arrest and imprisonment.

Freedom of speech, Right to education, property rights or even right of employment has become foreign to the people of Gilgit-Baltistan.

Protests demanding the release of political prisoners, including a prominent local activist Baba Jan, have entered the third week in Gilgit Baltistan with protestors questioning the draconian law under which the activists have been arrested, saying the region is not a part of Pakistan and its laws do not apply here.

Even the remote villages and far-flung corners of the region have joined in the movement that demands the release of political prisoners, who are serving illegal sentences.

Arrested in 2011, Baba Jan is an activist who challenged the then Pakistani administration which was essentially working against the people of Gilgit-Baltistan.

The Pakistan establishment has used the draconian schedule IV of the Anti-Terrorism Act in Gilgit-Baltistan to muzzle the reasonable voices that resist its repression.

It has framed dozens under the law not only to give itself a free rein to rule the region but also to send a threatening message to all sections of the society.

Protesters say that their protests have grown huge in size but have generated a little ripple effect because of the biased coverage by Pakistani media. They say their protests are indefinite in nature this time and they will not give in to any administrative persuasion or coercion.

“If you (Pakistan establishment) think you can muzzle our voice through forces, let me tell you, you can not. It is the 21st century, we will not sit quietly. Pakistani media is doing selective reporting and is not covering our issues,” a protestor said.

Locals have also threatened the authorities with the intensification of protests if their demands were not met immediately.

They called out Pakistani government for being ghoulish in their attitude while dealing with the people of this illegally occupied region.

A protestor said they are subject to atrocities on the whims of Islamabad as lawfully the region is not even a part of them. Pakistan has misgoverned the region for more than seven decades and has not granted people with even fundamental rights.

“We are not part of Pakistan. Pakistan constitution does not apply to us. There is no logic and law behind the arrest of our people. They have been arrested from the last 10 years. If we are not part of your country so how can your laws apply to us?” asked another protestor.