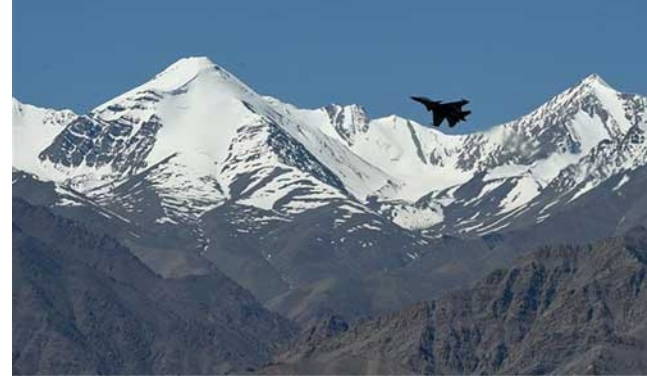 As military build-up on both sides of the Line of Actual Control (LAC) in eastern Ladakh continues, a constant stream of IAF heavy lift aircraft have airlifted dozens of additional tanks and armoured personnel carriers to the Himalayan heights for building up more firepower.

Amidst carrying out combat air patrols over Ladakh and maintaining operational readiness platforms at various airbases to scramble fighters, the IAF is using its C-17s and IL-76s Transporters for carrying out multiple sorties out of Chandigarh and other places over the past weeks for the purpose.

Some elements of armoured formations based in the Western Sector, which include the newer T-90s, have been earmarked for the Ladakh frontier.

Prior to the current face-off with China, which witnessed extremely violent moments, India had an Armoured brigade with three armoured regiments and a Mechanised Regiment stationed in Ladakh,.

The manner of concentration and employment of an armoured formation in high-altitude areas is a lot different than that in the plains, the traditional domain of mechanised forces.

This is for the first time since 1987 OP Trident that tanks and mechanised elements have been urgently airlifted to Ladakh to meet operational requirements and beef up offensive and defensive capabilities when both sides are locked in close confrontation.

“Tanks already stationed there were also airlifted over a period of time, but that was done under different conditions,” he added.

During the 1962 Sino-Indian war, the IAF had used the AN-12 transport aircraft to ferry six AMX light tanks of 30 Lancers, to Chushul, just south of the Pangong Tso lake, another flashpoint in the ongoing stand-off.

In the 1990s, the IAF began airlifting T-72 tanks and BMP-1/2 mechanised infantry combat vehicles in the IL-76 aircraft to Leh. The doctrine of deploying tanks in Ladakh saw a reversal subsequently, but was revived again with the forming up of three armoured units picking up in 2014

The Army’s perspective plans call for an armoured brigade each in the northern and eastern sectors along with three additional mechanised infantry battalions outfitted for high-altitude operations, but financial constraints have cast a deep shadow over the process.

Though mountainous and extremely rugged, there are some relatively flat areas in the Ladakh sector like Chushal and Demchok where tanks and armoured personnel carriers can be employed for defence as well as offence.

Besides adding to firepower, tanks also act as a deterrent. While the general altitude where tanks would be operating in Ladakh is 12,000-14,000 feet, the Army has carried out successful trials of driving up tanks to altitudes above 18,000 feet.