They are both ambitious, nationalist leaders, eager to assert greater roles for their countries in a turbulent world. With major challenges at home, neither wants to risk losing face, even in a dispute over mountainous territory that is all but desolate.

Xi Jinping of China and Narendra Modi of India probably did not intend to ignite a clash on their border on Monday, high in the Himalayas, that killed 20 Indian troops and may have resulted in Chinese casualties, too. Yet the leaders of the two nuclear-equipped countries now confront a military crisis that could spin dangerously out of control.

“The sovereignty and integrity of India is supreme, and nobody can stop us in defending that,” Mr. Modi said on Wednesday in a short televised speech, breaking his public silence over the incident. He vowed that “the sacrifice of our soldiers will not be in vain.”

“India wants peace,” he went on, “but if provoked India is capable of giving a befitting reply.”

The clash, the worst violence between them in 45 years, resulted from policies both leaders have pushed to bolster forces along their 2,100-mile border and to project a muscular image at home and abroad.

Indian army soldiers carrying the body of a comrade who was killed in a border clash with Chinese troops, at a hospital in Leh.

“This kind of provocation is aggressive, and we have no choice but to contain it,” Yue Gang, a retired colonel in the People’s Liberation Army, said on Wednesday, blaming border tensions, which flared up in May, on India’s actions and Mr. Modi’s political ambitions.

“China is willing to go head-to-head with it and isn’t afraid of deaths or even of opening fire,” he added.

China pledged on Wednesday to avoid a broader conflict, but its foreign minister, Wang Yi, scolded his Indian counterpart in a telephone conversation. He accused India of provoking the clash on Monday night, despite an earlier agreement to withdraw forces from the Galwan Valley, a remote area straddling the disputed frontier that has been the focus of fighting before, including a war between India and China in 1962.

“The Indian side must not misjudge the current situation and must not underestimate China’s firm will to safeguard territorial sovereignty,” Mr. Wang told India’s Minister of External Affairs, Subrahmanyam Jaishankar, according to a statement released in Beijing.

Hours later, India’s ministry posted its own version of the conversation, saying that Mr. Jaishankar blamed China for “a premeditated and planned action that was directly responsible for the resulting violence and casualties.”

Both Mr. Xi and Mr. Modi are in uncharted territory. They are dealing with the coronavirus, which is still spreading in India while China tries to contain a new outbreak in Beijing. The economies of both countries are weakened and vulnerable.

The deaths along the border only increase their anxieties, making a diplomatic resolution all the more difficult.

“For years India and China have said there have been no fatalities” along the border, said Tanvi Madan, director of the India Project at the Brookings Institution in Washington. “That they have crossed that threshold in and of itself makes this a significant incident.”

So far, Mr. Modi appears to be projecting toughness while trying to avoid a deeper conflict. Photos in Indian media showed military convoys on the winding roads approaching the disputed region, and local residents described heavier than usual troop movement. Even so, military analysts said that forces had not been put on full alert.

Mr. Modi, who met with his defense and foreign ministers Tuesday night at his home, already faced criticism from opposition leaders that he was feckless, despite his nationalist appeals and his sharp response last year to an attack linked to a militant group based in Pakistan

“Why is he hiding?” Rahul Gandhi, one of India’s most prominent opposition leaders, wrote on Twitter. “Enough is enough. We need to know what has happened. How dare China kill our soldiers? How dare they take our land?”

Mr. Modi’s media allies could help him weather the storm. On Wednesday, media friendly to his party circulated unsubstantiated reports that Indian troops had won the skirmish. If people believe the reports, true or not, that could lessen the pressure to retaliate.

“A whole bunch of myths have been created,” said Ajai Shukla, a retired army colonel turned popular commentator. “And many of Modi’s followers will back him no matter what.”

Activists from Mr. Modi’s Bharatiya Janata Party at an anti-China protest in Siliguri, India on Wednesday.

China is carefully minding its own message. Unlike India, which has a freewheeling media and vibrant if weakened opposition parties, Mr. Xi’s seasoned propaganda apparatus is able to control the flow of information. China’s state media have offered only sparse reports on the clash, rather than stirring nationalist fervor, though some still spilled out.

It is still not clear whether China suffered fatalities. In four decades, the People’s Liberation Army had lost just three soldiers to fighting abroad — troops who were killed in United Nations peacekeeping operations in Mali and South Sudan in 2016.

“I just don’t understand,” one person wrote on Weibo, the Chinese social media site. “Why didn’t we announce the casualties of our side? What do we have to hide and why?”

Officials in India have blamed China for starting the confrontation along the border in May by sending troops into the Galwan Valley, among other places. Several brawls broke out between the opposing forces, causing serious injuries.

Mr. Modi ordered India’s military to reinforce the border, even as commanders on both sides tried quietly to resolve tensions through a meeting on June 6.

While China remained tight-lipped about the latest violence, new details emerged from India. A number of Indian troops were captured, two Indian military officials said in interviews, speaking on condition of anonymity to discuss military operations. Their fate remains unclear, and presumably is the subject of intense maneuvering behind the scenes. 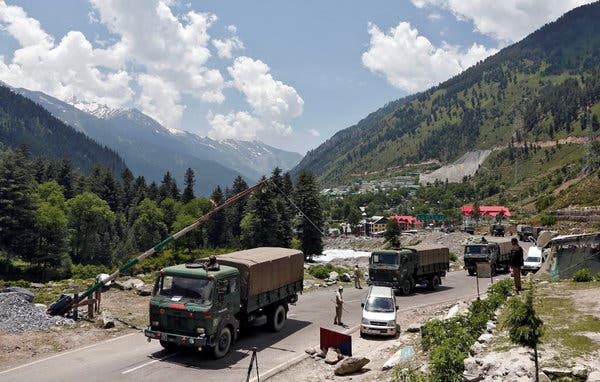 An Indian military convoy driving along a highway leading to Ladakh, an area near the Chinese border, on Wednesday.

The fighting began after Indian troops on Monday set fire to tents erected by Chinese soldiers, the officials said. The Indian force later encountered a much larger patrol of more than 100 Chinese soldiers, they said, wielding fence posts and clubs wrapped in barbed wire or studded with nails.

The two sides reportedly had no firearms, according to longstanding protocols for the two militaries along the Line of Actual Control, the boundary drawn after the 1962 war to keep them apart.

Among those killed was the Indian commander, Col. Bikkumalla Santosh Babu, whose death appeared to spark a larger fight along a steep ridge, which continued into Tuesday morning.

The officials said several Indians died after falling from the ridge in the dark or intentionally jumping into the Galwan River. India initially announced the deaths of only three soldiers but then the toll rose by 17, whose deaths were attributed to “environmental conditions” at the high altitude.

Hu Xijin, the editor of The Global Times, a Chinese newspaper controlled by the Communist Party, taunted India on Twitter, saying 17 injured soldiers died because India’s military could not evacuate them quickly enough for medical treatment. “This is not an army with real modern combat capabilities,” he wrote.

For all of Mr. Modi’s aggressive rhetoric, the clash has underscored how far India has fallen behind its neighbor, militarily and economically.

“India has no options, or limited ones,” said Rahul Bedi, a military analyst in Delhi. “Appeasement is a risk,” he added, but one that “may be more digestible for now.”

Others in India say that the danger of inaction is greater. China has chipped away at territory along the disputed frontier — seizing about 23 square miles in the past two months. 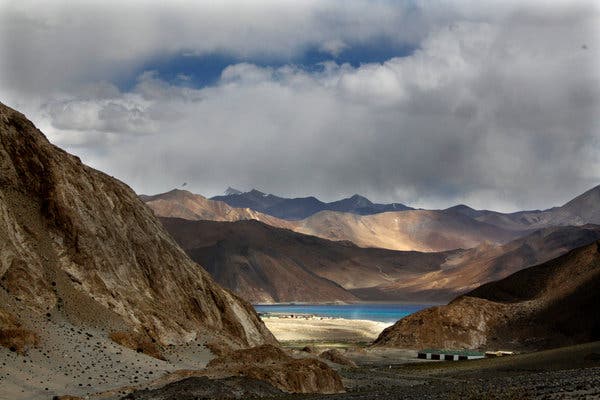 Ms. Madan of Brookings said that many Indians viewed this as “salami slicing” similar to China’s establishment of military bases on contested islets in the South China Sea, moves that have frustrated neighboring countries and the United States.

“It’s not lost on folks that this is the fourth major boundary incident since 2012,” she said, referring to the year Mr. Xi rose to power. “What they seem to be trying to do is the territorial version of what they have done in the South China Sea.”

Samir Saran, the president of the Observer Research Foundation, a Delhi think tank, who is seen as close to Mr. Modi’s government, said that if India does not stand up to China, Beijing may double down and continue to claim more contested terrain.

“You don’t surrender to a powerful enemy,” he said.

“There have to be costs attached to Chinese behavior,” Mr. Saran added. “India may have to be prepared for series of limited skirmishes to occasional conflicts. Maybe that is the new normal in our region.”