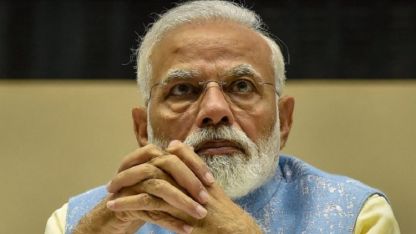 A policeman stands guard at a roadblock during the first day of a 21-day government-imposed nationwide lockdown as a preventive measure against the COVID-19 coronavirus in New Delhi on Wednesday.

India’s billion-plus population went into a three-week lockdown on Wednesday, with a third of the world now under orders to stay indoors.

The way the Chinese people were made to follow their government’s instructions is not feasible in a democratic country like India. However India with its decision of 21 days lock down has still shown as to how to effectively address the novel coronavirus outbreak.

He urged the public to stay inside their homes for three weeks, and warned failure to do so would set the country back 21 years and families would be destroyed.

According to the data released by the Ministry of Health and Family Welfare of India, as of Sunday, 867 active COVID-19 cases and 25 deaths had been confirmed, which is far far less than Italy, the worst-hit country in Europe, with confirmed some 92,742 cases as of Sunday. So why would Modi take such tough measures so urgently?

Although there are only fewer than 900 confirmed cases in India, it remains unknown how many people are actually infected, in India it is difficult to carry out all-out, large-scale tests.

While the pandemic spreads around the world, India can hardly remain immune. Modi’s order for the nation to self-quarantine will surely help, but it will need the willing cooperation of the people.

Strict quarantine measures are the most effective way to curb the spread of the virus. India has observed the lessons learnt by China and is now trying to implement it.

Indians, living in a democratic system, question and oppose blind or unexplained government orders, adding to the burden of authorities as they attempt to implement tough measures. What’s worse, without a comprehensive authoritarian monitoring system like China’s, India may not be capable of tracking citizen’s movements.

Indians are mostly following the government’s instructions. However some in the public are not fully aware of the unprecedented threat of the coronavirus outbreak and they are not yet taking it seriously. Then there is a large migrant daily wage workers who have been badly affected by this lock down. Though after initial hiccups things are getting back on track.

If indeed fewer than 900 people have been infected in a country with a population of over 1.3 billion, India’s outbreak remains far from severe, and this could also impede people from taking the self-quarantine order seriously.

Around the world, we’ve seen people ignore the threat and danger of the virus until it’s too late to effectively contain its spread. With very high population density and an overburdened healthcare system, if the Indian government fails to coordinate its coronavirus fight with the public, the consequence will be unexpected.

In metropolises such as Mumbai (population 22 million) and New Delhi (population 30 million), where there is by necessity close public interaction, a widespread outbreak of the disease could pose a grave strain on the administration.

However a very strict lockdown will be a major blow to India’s economy. The impact on the economy of a production shutdown will be far greater than any national disaster, making it even more difficult to completely enforce the quarantine order, which in turn has the potential to trigger a severe outbreak.