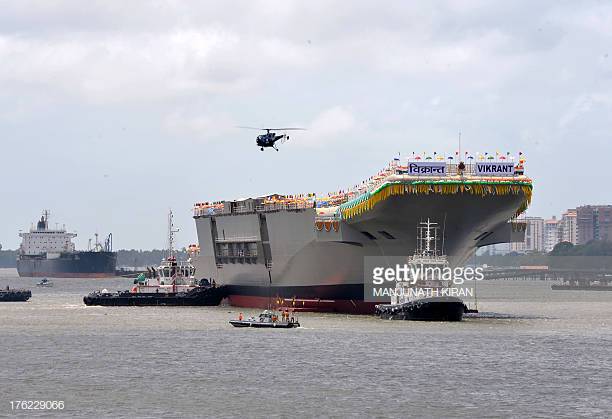 After mastering construction of 7500 ton destroyers, India had started on the ambitious project of construction of an aircraft carrier. Only a handful of countries have done so.

Thus due to learning hiccups there was a bit of delay in the project, which was anticipated to be completed by 2018, is now back on track.

This 37,500-tonne aircraft carrier will initially operate MiG 29K fighters and in future will surely be operating the LCA Navy Mk1 in limited numbers and Mk2 in full strength.

The carrier, the largest ever warship to be constructed in an Indian yard, is now in its final phase of construction and the Navy should be operating a limited number of the mark 1 maritime version of the Light Combat Aircraft (LCA) once it gets fit for service.

However, a mark2 version of the indigenous fighter jet that would meet all the technical requirements of the Navy is likely to be ready for operational duty only by 2026.

As India will be having two aircraft carriers, we may have to go in for fast production of a squadron of Mark1 version of the LCA. The other option will be to get a few more naval version of MiG 29 for the Navy till LCA Mk2 joins service.

The LCA Navy mark1 will be going for deck trials on the INS Vikramaditya soon, as it has cleared a series of test flights at the Shore Based Testing Facility (SBTF) in Goa. The fighter jet has undergone night trials as well as a launch with four air-to-air missiles on board in recent days.

With the Defence Research and Development Organisation (DRDO) promising a technically compliant fighter jet by 2026, the Navy would also using it for the second indigenous aircraft carrier that it plans to build. Though funds have not been cleared by the defence ministry, the Navy is hopeful of a speedy approval for its plan to construct a larger aircraft carrier at the earliest.

Now the engines on board the first Indigenous Aircraft Carrier (IAC) being constructed at Kochi have been switched on and the Cochin Shipyard along with Naval team will be starting on the next step of harbour trials, with expectations that the warship would be ready for sea trials in 2020 and for commissioning by late 2021.

“We have started the engine and hope to get the ship commissioned by 2021. It will take a year after that to get it operational.