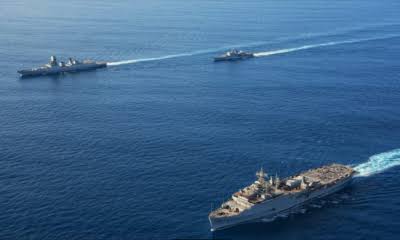 By
Cmde Srikant B Kesnur

When we were commissioned in the mid-eighties the Osa class Killer Boats were the stuff of legend. They would be nestling together, usually at the Barrack wharf or the Cruiser wharf, and one spoke reverentially about their hallowed past. We also admired their squadron culture which engendered a feeling of loyalty among all Killers and envied the fact that their in-living officers stayed in Command Mess, then the Mecca for all bachelors.

However, even then, it was becoming clear that they were getting on in age and, while they were coping with it gracefully, the signs were visible. While the josh was high, obsolescence along with limited sea legs and suboptimal habitability meant that the Navy needed a newer generation of missile boats — one that carried the spirit of the pioneers but were more contemporary in design and warfighting abilities.

The Naval Headquarters paying heed to this need decided on the Soviet Tarantul class missile corvettes as the replacement. These came to be known as the 1241 RE after the project or the Veer class (for a while) in India after the first one to be so commissioned in March 1987.

Nirbhik, Nipat, Nishank and Nirghat followed INS Veer in quick succession. It must be remembered that the period between 1985 and 1990 was a particularly important one with regard to our hardware and platforms as the Navy practically had a new inventory.

The last two SNFs, the last two G class, the aircraft carrier Viraat, Khukri class, LST M, Magar, the EKM and SSKs, the TU 142s, the 1241 REs and PEs, almost all of them were inducted into the service in this half decade plus. So, it was an exciting time to be in the Navy and to be young in it was very heaven (with apologies to William Wordsworth).

Thus, in early 1989, when we were doing our PCT for minesweepers in Kochi many of our course mates were selected as the Commissioning crew of Nishank and Nirghat and as the first change crew for the first three ships.

Suddenly, the “balance of power” had shifted and the REs were the new queens of the ramp. To be selected as their crew was prestigious and we were, understandably, envious. Of course, most of those selected were ‘hotshots’ and it seemed that the best talent was being earmarked for these ships. The earlier OSA class of the 25th Killer Squadron continued to serve with distinction — in fact the last of them were decommissioned in the first decade of this century — but it was clear that it was now the 22nd Killer Squadron or 22 KS where the action was.

For officers of my and subsequent generations, it is the Killers 2.0 that have been more visible, more operational and occupying a bigger space in our mindscape. And now, as they too have begun to be retired from service, with few of them decommissioned already, it is perhaps right to doff our caps in tribute to them.

It may seem ironical coming from a man who has never served on the Veer class ships — my closest brush with the REs was when there were galley packets in Vizag of my being appointed as K 22 after my tenure as CO Jalashwa; they were just as quickly dismissed by the originator of the rumours on the grounds that as I had not served on them earlier I was not qualified to be the ‘Kay’. I felt that this Catch-22 situation was unfair and in any case no fault of mine but one has no way of dispelling such gossip or machinations where people on the field plan appointments and transfers blissfully unknown to the P branch.

But, on balance, it may be just right that someone who is not a ‘Killer cowboy’ writes about these ships because it would seem impartial and without bias. In the 25 to 30 years that they have served the Navy and nation it would be fair to say that the 22nd Killer squadron ships have a rich catalogue of achievements.

While the country has fortunately not seen a full-fledged war since 1971, our volatile neighbourhood has necessitated several war-ready deployments, most particularly during Op Vijay (Kargil) in 1999 and Op Parakram in 2002.

many of my contemporaries were in Command or XOs, so one got a feel of readiness and adrenaline flowing through these ships. I am also sure that on several other occasions in the early nineties when the security situation was fraught, later post-26/11, and more recently in the aftermath of terrorist attacks in Pathankot and Uri and our strikes in Balakot, as well as post abrogation of Article 370, when our western neighbour made threatening noises, the ships of this class would have been called to duty and first to respond.

In fact, on account of their ideal mix of firepower, habitability, speed and flexibility these ships have been the first responders where maritime security imperatives have necessitated swift and commensurate deployment. One or two REs forward deployed in our areas of interest or ports to render both offensive punch and defensive assurance has provided force multiplier effect to our operational posture.

In fact, it can well be said that these ships have played an invaluable part in sustaining peace and to keep the conflict possibilities below a certain threshold. While a latterday historian would undoubtedly ferret out the many and multisplendoured missions and activities of this squadron — there were 16 ships at their peak strength — it would be safe to surmise that they did much else besides providing terrific firepower and quick deployment options. I clearly remember that they were deployed to provide succour and relief in Gujarat after the massive earthquake in 2001 and did a stellar job.

Despite their relatively limited sea legs they have also shown our flag at few places and they have been used in SAR/HADR missions too whenever such requirements arose. I vividly recollect the SAR for the Seaking that had crashed off Mumbai in 1990, my ship Alleppey was amongst the earliest at scene of action but one of the REs — either Nipat or Nirbhik — was already there and, in fact, the first one to locate the debris. One of the REs — Prahar — was also involved in the joint Navy-CG operation to capture the pirated ship Alondra Rainbow, in October 1999.

And this is simply a quick and random recollection. While this fact has not been given much credit, I also think that these ships did much for the Navy’s public diplomacy efforts. Since they gave us the options to deploy them at various small and minor ports, whether as part of our operational design or for testing OTR facilities or proving forward basing or for Navy week activities, they, naturally, were visited by government officials, port authorities, local media, citizens and the aam aadmi and thus developed a natural affinity with the ports visited and people there.

This furthered awareness about Navy in these far-flung places. There were also several other things that these ships brought into the mix. I can think of three important ones. The first was that they incubated excellence and represented the very best of the Navy at the junior leadership level.

To be selected as the CO of a 1241 RE as a Lt Cdr signified that you were the crème de la crème in your batch. Similarly, to be the XO or GO (fresh from Long G at Dronacharya as first appointment) or non-specialist NO or EO or LO on these ships meant you were ahead of the pack. This had a domino effect wherein anyone posted on these ships, even if not the topper variety now aspired and worked hard to get there.

Second, as a consequence of the above, these ships and officers always exhibited high levels of professionalism, derring-do and bonhomie. This peculiar alchemy of professional and personal attributes meant that these ships often punched above their weight be it in fleet exercises or sports fixtures. Despite the small size of their crew and minuscule number of officers, their versatility, josh and fierce sense of exceptionalism earned them many awards and kudos.

This was particularly marked during exercises at sea with fleet ships when the station keeping or gunnery exercises or reactionex serials often found these little fellas besting their big bros. This was also seen in sharp focus when the FOCWEF and FOMA often were arranged on opposite sides of tactical exercises and the REs not only provided the latter with firepower but much frisson and chutzpah.

Third, this also led to some valuable professional and operational inputs and advances. Most of the senior commissioning crew of the first few boats were those who had earlier done tenures on other Soviet ships. The REs added to their knowledge of the Ruski doctrines, tactics, SOPs.

This, in turn, contributed to the broad stream of understanding Russian Operational Art and consequently into integrating that with our own approach, largely derived from the British. While our tryst with the Russian hardware started in the late sixties, it could be argued that the integration of Russian, Western and Indian platforms, tactics, even traditions reached their peak in the late eighties and early nineties when we had adequate numbers in our inventory from all sources. The REs and their officers played a vital role in this, not least because the sixth ship (Vidyut) onwards were built in Indian shipyards on the Soviet design but with progressive improvements.

The REs, thus, contributed a great deal to our Continuing Professional Education. They were also often the launch pads for innovation. The use of IGLA SAM to add to antiair capability is a case in instance and I am sure there are more that those who served on them will recollect.

They also happened to be pioneers in network-centric operations in our Navy courtesy the tech innovations carried out by B.S. Ahluwalia, J.T. Mundekel and M.P. Anil Kumar — X officers all — which then worked as the template for the rest of our Navy.

A lot of this spirit and talent was also evident in the many Killer nights or in the fine annual journal ‘First Strike’ or in the conception of Light and Sound Show or in the maintenance of our heritage structures along the Caste Ramparts which was their den or the many in-house talks, seminars and workshops they used to conduct (now alas a fading tradition). And, above everything, the fierce Killer spirit that pervaded them all. It was as though they belonged to a separate breed. I know of at least one crew (Commissioning Crew INS Nirghat) that made it a point to get together every five years or so long after all of them had gone their separate ways. I guess the same spirit, in different manifestations, is present in every crew of every Killer boat from inception to the present.

Thus, we can conclude that the Killers 2.0 were not only worthy successors to their illustrious predecessors but have kept the glorious legacy alive and vibrant with their professional excellence, panache, resoluteness and a ‘can do’ spirit that was the envy of their contemporaries in the service. Here is a loving toast, a salute and three cheers from an admiring outsider. And as the REs approach their sunset years, here is hoping that future generations and the next avatar of Killers maintain the brand equity of the Killers and leave behind even more lasting legacies.