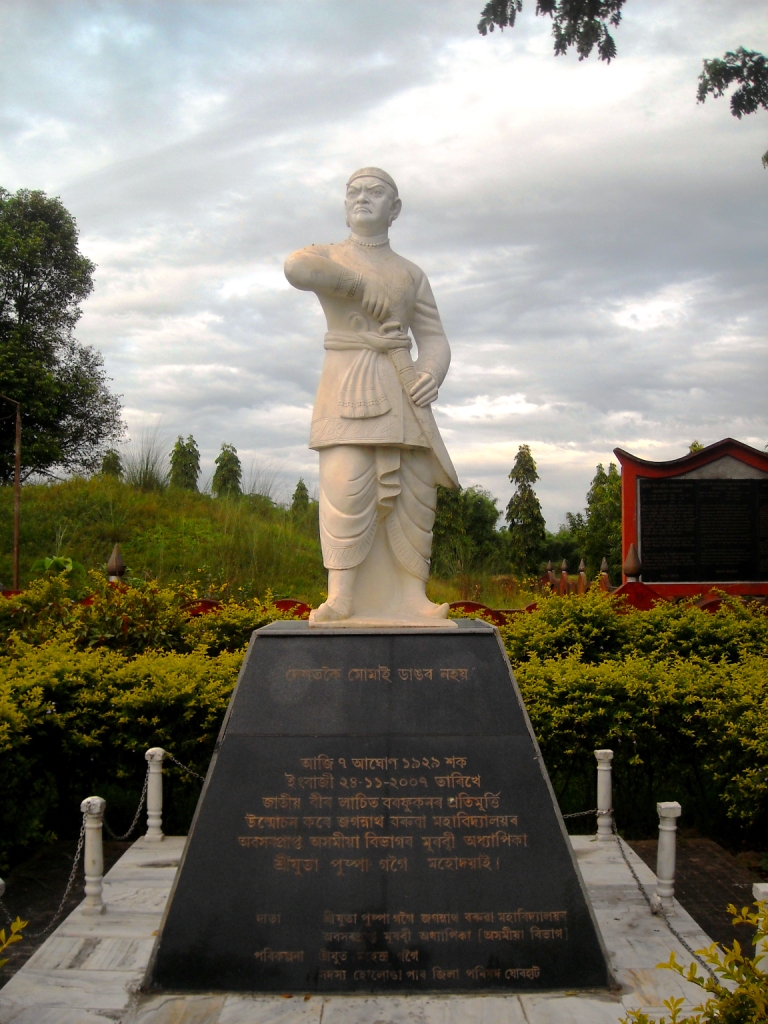 At the National Defence Academy every Term following the completion of training, the overall best Army Cadet is awarded with a gold medal. This medal is named after a great warrior General Lachit Borphukan. But strange enough, most of us know nothing about this historical character. Most Indians don’t even know his name. This is because our liberal secular historians very cleverly removed him from our history books. A soldier in whose name the future generations of Military officers are honoured, and we never see any sentence about him in the history books in India. our history books have been filled with rubbish like the Jihadi fable of Humayun suffering from fever and Babar taking the fever on himself to save his son’s life!

Ever thought why the great Mughals were never able to proceed beyond Bengal into Assam ? The only reason was this General whose chapter was carefully made to disappear from our history books by vested interests.

Assam Foundation-India under the leadership of its founder-member and director Bhabananda Deka and executive director Arnab Jan Deka were primarily instrumental in introducing the 17th century Assamese Army General Lachit Borphukan at the pan-Indian level for the very first time.

The lecture on the life and times of Lachit Barphukan was attended by leading political figures, historians, bureaucrats and Army officers. It sought to place the great Ahom general at the centre-stage by bringing out his feats and deeds of bravery. The Chief of the Army Staff, V P Malik, who was present at the lecture in order to perhaps remove the shortcoming of historians, agreed in principle, to institute a Lachit Barphukan prize at the National Defence Academy. The move, it was felt, would promote awareness about Lachit among the officers of the Defence services and inspire them to emulate his great example.

The function was inaugurated by Vice President, K Kant who said that leadership of Barphukan as a Ahom general was a great watershed in the political history of Assam. Addressing the function, the Union Home Secretary B P Singh said that whenever great politician, military leaders and patriots meet, great events happen of which the country saw glimpses in Lachit’s life.

Almost all leading Indian newspapers extensively covered this event in their national editions published from New Delhi on 25 April 1999. Press Trust of India also reported that Assam chief minister Prafulla Kumar Mahanta and governor S K Sinha “thanked the Army Chief General V P Malik, for agreeing in principle to institute a ‘Lachit Barphukan Prize’ at the National Defence Academy saying this would inspire defence personnel to emulate Barphukan’s heroism and sacrifices. The main organizer of the historic event Arnab Jan Deka recalled the proceedings of the event leading to institution of Lachit Barphukan Award and Statue at the India’s top military institution.

Now coming to the cause of the failure of the Mughals to advance eastward he is none other than the Asom braveheart Lachit Bagikan! A courageous and powerful General of the Ahom empire. In 1669 he defeated the huge Mughal army so badly that they were forced to leave Assam forever. Their defeat was similar to the thrashing the German Wehrmacht faced in Stalingrad, the only difference was that the Ahoms didn’t chase them deep into Bengal.

The history of the battle of Saraighat is still remembered by the Assamese people with great reverence and pride. The 24th day of November is celebrated all over Assam as a Victory day as the Lachit day in honour of his great bravery.
When the great Mughal emperor Aurangzeb was sitting on the peacock throne in the red fort of Delhi, Ahom was ruled by king Chakradhwaj Singh. He appointed Lachit Barfukan as his general.

During the battle of Saraighat the Assamese troops were led by Lachit Barfukan and the Mughal side was under the leadership of Ram Singh, the Rajput prince of Amber in Jaipur and son of Raja Sawai Jai Singh. Since the Mughal army was huge in comparison to the Assamese, Lachit strictly used guerilla warfare and avoided straight combat. After the failure in war, the Mughals conspired against Lachit. The Mughal general Ram Singh wrote a letter to king Chakradhwaj, it was arranged like the letter was from Ram Singh to Chakradhwaj which by mistake fell in the king’s hands. It stated that the 1 lakh ₹ for Lachit was kept ready against which the capital Guwahati gates will be kept open for the Mughals. But Ram Singh’s conspiracy turned unsuccessful here in contrast to the success of the same tactics everywhere else. King Chakradhwaj had complete faith on the honesty of his general. The prime minister Atan Bargohai carried out a thorough investigation and finally reported the conspiracy to the king. The Mughals had 30000 foot soldiers, 15000 archers, 18000 horsemen, 2000 cannons, 40 large boats and 21 high ranking officers. When Lachit got grievously injured, the Ahoms started withdrawing.

It was then that their general Lachit said, “if you want to go back you are free, but I even in spite of my wounds will fight until death. Go back and tell king Chakradhwaj that I fought with determination till my last breath!”

Lachit’s motivational speech moved his army so much, they decided against going back and jumped on the huge Mughal army head on. They fought so bravely and with such determination, they were able to defeat the numerically much superior Mughals decisively! Lachit’s wound became infected and then turned to a gangrene during the war. He was running a high fever too. The courageous commander continued his fight with his men till he won his victory finally. A few days after the Saraighat war, Lachit died a martyr due to the infected gangrenous wound!

The Mughals never dared to enter the north east following their defeat in the Saraighat war!