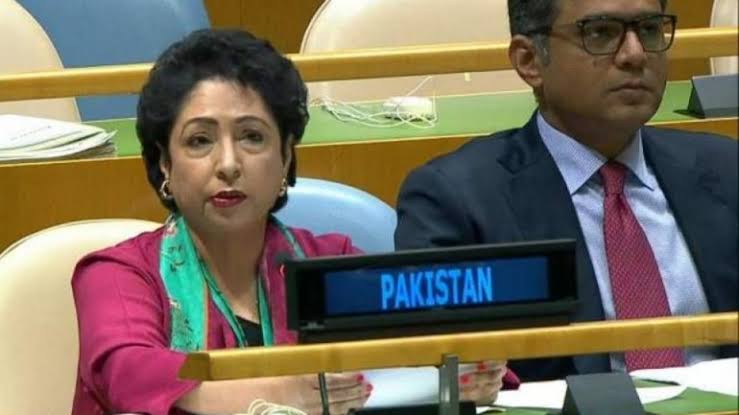 The United Nation on the request of Government of Pakistan issued a letter giving permission for releasing some amount from the accounts of Hafiz Saeed, Haji Muhammad Ashraf and Zafar Iqbal enabling them to meet their daily expenses.

The UN issued this letter on August 15, 2019 but Maleeha Lodhi and his secretary Usman Tipu allegedly kept the letter on hold and waited to make it public when Imran Khan reached New York to address UN General Assembly. The sources said the letter was intentionally hidden by Dr Lodhi and her secretary Usman Tipu in order to surface it at the time of Prime Minister’s visit to New York to address the United Nations General Assembly.

Leaking this letter written by United Nations to Pakistan about Hafiz Saeed to pro Indian media has come as major reason behind removal of former permanent envoy of Pakistan to UN Dr Maleeha Lodhi. The motive behind leakage of letter to Indian lobby was to thwart the Prime Minister Imran Khan visit to the United States.

Prime Minister Khan who was given the whole story behind the letter removed Maleeha as permanent envoy of Pakistan to UN. The sources said that there was another solid reason which prompted the terrible reaction by the prime minister.

The letter started circulating in WhatsApp groups of journalists in New York when Prime Minister Imran Khan was present in the United States to address the UN General Assembly. The news leaked when an Indian journalist during Foreign Minister Shah Mehmood Qureshi’s press conference asked Qureshi why you don’t fight case of Hafiz Saeed in the United Nations instead of fighting the case of Kashmiris. The so called conspiracy was exposed by a Pakistani journalist who conveyed the whole story behind the letter to Imran Khan in New York.

Besides, Dr Lodhi also wrote a letter to Prime Minister’s Adviser for Information and Broadcasting Firdous Ashaq Awan to appoint former press minister Saeed Anwar (Retd) on the vacant post of Press Minister. When the request letter was investigated its links were also connected to the above mentioned story.

Later on decision was taken by Imran Khan to remove Maleeha Lodhi. It is pertinent to mention here that Pakistani media was flooded with reports on social media that Faisal Sherwani, son of Maleeha Lodhi had got married to an Indian lady whose family has close relations with PM Modi’s family. No contradiction has come from Maleeha Lodhi and her family on this count so far.