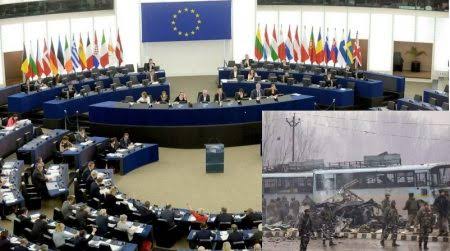 Members of the European Parliament (MEP) have condemned the blatant and brazen disclosure by a Pakistan minister in its National Assembly about the country’s involvement in the Pulwama terror attacks in India.

Several MEPs – Thierry Mariani, Julie Lechanteux, Virginie Joron, and France Jamet – in a strongly worded letter to President of European Commission, Ursula von der Leyen, have urged to immediately consider sanctions on Pakistan and seek an investigation into its involvement in other similar attacks of terrorism in Europe.

“We call on the European Commission and the European External Action Services to immediately condemn the leadership and government of the Islamic Republic of Pakistan for its participation in the Pulwama attacks and request the European Union to consider sanctions against those responsible,” the MEPs said in the letter dated November 4.

The dastardly terror attack on a Central Reserve Police Force (CRPF) convoy in Jammu and Kashmir’s Pulwama district on February 14, 2019 claimed the lives of 40 personnel. Terrorists rammed an explosive-laden vehicle in the bus.

“However, on 29 October 2020 Pakistan’s Federal Minister for Science and Technology, Fawad Chaudhry, stood up in the Pakistan National Assembly and hailed the Pulwama terror attack as a ‘success ‘under Imran Khan’s government. Chaudhry credited Pakistan’s Prime Minister, Imran Khan and the Tehreek-e-Insaf (PTI) party for its great achievement,” the letter by MEPs said.

The MEPs said that Pakistan, under the control of successive political regimes and leaders, has been well documented as a country of ‘State Sponsored Terrorism’.

“This latest admission from inside the Pakistan parliament, by a serving Minister, comes less than six month after Imran Khan himself gave a eulogy to Osama bin Laden inside the National Assembly calling him a ‘martyr’,” they said.

The MEPs pointed out that at a time when then there is rising public insecurity from a global health pandemic, Europe, and France in particular, now face increasing threats of terrorism.

“In the face of such threats and horrific violent aggression on innocent people, it is essential that the European Union does not remain silent. Any admission of acts of terrorism, wherever they occur in the world, must face immediate denunciation and action by European leaders,” they said.