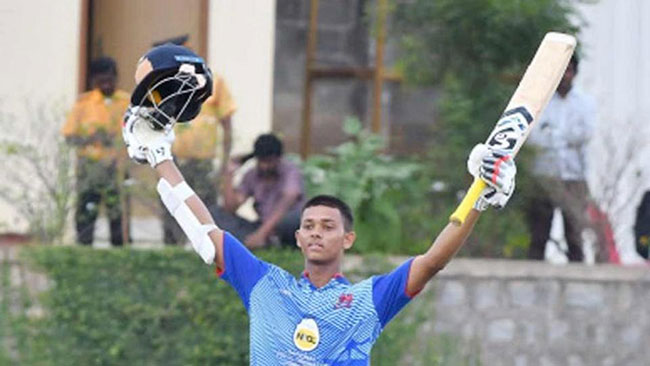 Mumbai teenager Yashasvi Jaiswal on Wednesday smashed his way into the record books by becoming the youngest player to score a List-A double century.

Playing in his debut Vijay Hazare season, the 17-year-old scored 203 off 154 balls, which included 12 sixes and 17 fours against a Jharkhand attack that included out-of-favour India pacer Varun Aaron and Shahbaz Nadeem.

The opener’s scintillating innings helped Mumbai set a mammoth target of 359 for Jharkhand in the Vijay Hazare trophy Elite Group A match.

Jaiswal has been in fine form in the tournament, scoring 113 and 122 against Kerala and Goa respectively.

The opener made it the ninth instance of an Indian scoring a List A double-ton.

The feat comes less than a week after Sanju Samson scored 212 not out – his first List A century – for Kerala against Goa, making it the highest individual score in the competition.