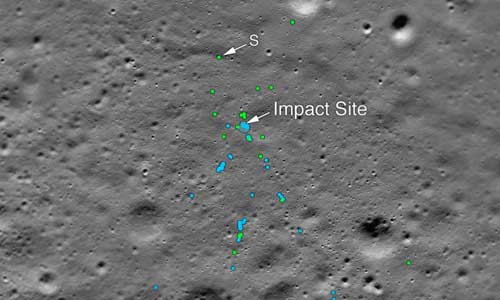 Analysis of the images taken by NASA’s Lunar Reconnaissance Orbiter (LRO) Camera, released early on December 3 (IST), for the first time, has indicated the debris of Vikram, the Chandrayaan-2 lander that hard-landed on Moon on September 7.

In a statement, NASA said: “Vikram lander found.” An image of Moon with blue and green dots show the impact point of Vikram and an associated debris field.

While the NASA statement does not elaborate on Subramanian’s identity, it says he had contacted the LRO project with a positive identification of debris.

“…After receiving this tip, the LROC team confirmed the identification by comparing before and after images,” the statement reads.

The LRO Camera team released the first mosaic (acquired September 17) of the site on September 26 and many people, including Subramanian, have downloaded the mosaic to search for signs of Vikram.

When the images for the first mosaic were acquired the impact point was poorly illuminated and thus not easily identifiable. Two subsequent image sequences were acquired on October 14 and 15, and November 11.

The debris first located by Shanmuga is about 750 meters northwest of the main crash site and was a single bright pixel identification in that first mosaic (1.3 meter pixels, 84° incidence angle).

The November mosaic shows best the impact crater, ray and extensive debris field. The three largest pieces of debris are each about 2 x 2 pixels and cast a one pixel shadow.