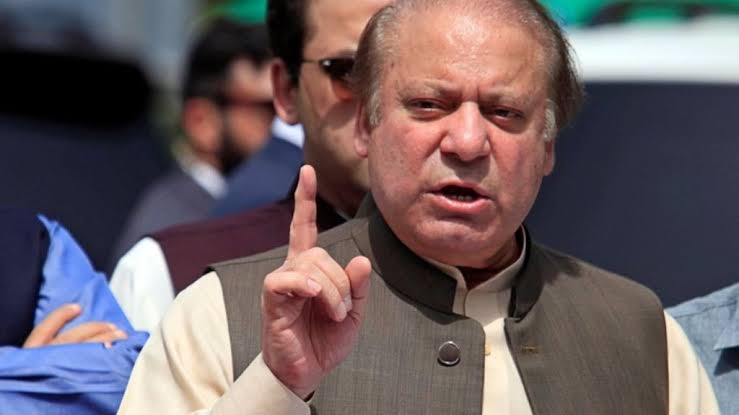 Imran Khan began to politicise various cases against the former Opposition leaders and started portraying them as a India versus Pakistan issue so that he could win the support of the military which plays a crucial role in the country in deciding who stays in power.

Sharif has thus played a deft political game and Imran Khan has fallen into a trap from which there seems to be no escape. On all accounts, India stands to gain immensely by these Pakistani political shenanigans. The Modi government should all out and nail Pakistan completely.
Sharif was addressing the Pakistan Democratic Movement’s (PDM), a coalition of opposition parties, first power show in Gujranwala via video link from London. Describing it as a “state above the state”, Sharif had accused the Army of interfering in the politics of Pakistan and sabotaging democracy and democratic institutions.

“Sharif has gone to the United Kingdom and is playing India’s game. He is attacking Pakistan sitting over there. He is 100 per cent getting backing from India,” Imran Khan said in statement.

In an unpresented attack on the Imran Khan and more importantly on the all-powerful Pakistani military establishment a Nawaz Sharif’s political party member accused the two of kneeling down before India and returned Wing Cmdr. Abhinanadan. This was in contrast to the widely held belief spun by the ISI that mounting international pressure was the sole reason that led to Pakistan releasing Wing Cmdr Abhinanadan within two days of his capture by Pakistani military. Now it has been revealed that the fear of another Balakot like strike played a major role in the decision.

This was revealed by Ayaz Sadiq, member of Pakistan National Assembly and a leader of the Pakistan Muslim League (N). During a debate in the National Assembly on Wednesday, the opposition leaders slammed the Imran Khan government accusing them of fearful towards India. Talking about the decision of hand over Abhinandan to India, Ayaz Sadiq revealed that Foreign Minister Makhdoom Shah Mahmood Qureshi had said that India would attack Pakistan if they don’t return Abhinandan.

Ayaz Sadiq said, “At that time, the feet of Pakistan army chief’s Qamar Javed Bajwa was trembling and his forehead was sweating due to fear of an attack by India. Bajwa was scared of India’s attack. ‘

The famous German scholar Arthur Schopenhauer once said, “Every miserable fool who has nothing at all of which he can be proud adopts as a last resource pride in the nation to which he belongs; he is ready and happy to defend all its faults and follies tooth and nail, thus reimbursing himself for his own.”

In the modern age when the world has become a global village, there are still nations that are living in medieval times and are not ready to abandon the shields of treason allegations. Pakistan, of course, is one of those nations where treason charges are used frequently against dissenting voices by the government and military establishment and where appeals to nationalism and patriotism are used to keep the people living in a fantasy.

On 5th October, 2020, a first information report was filed by a person in Lahore against former prime minister Nawaz Sharif and his close aides. The FIR accused Sharif and his colleagues of sedition and inciting people against such institutions as the army and the judiciary.

The Pakistan government is considering registering a treason case against a senior Opposition leader for his statement that the country handed over captured Indian Air Force pilot Abhinandan Varthaman to India under pressure, a top minister has said.

Pakistan lawmaker Ayaz Sadiq has said he stands by his statement.

“I stand by my stance. In the coming days, you will see that Pakistan has a clear message for India: that we as the Pakistani nation are one. We have political differences, but we are one against India,” said the former NA speaker in a press conference as quoted by Pak media.

Sadiq claimed that he was privy to “many secrets” as he used to head the National Security Committee of Parliament, but never gave any “irresponsible statement and will never give” one.

“We are political people. We have given statements against our political opponents and will keep on giving such statements,” said the PML-N leader.

Ayaz Sadiq’s disclosure had opened up by the Pandora’s box for Pakistan. What came as a real shocker was Science and Technology Minister Fawad Chaudhry’s response to Ayaz Sadiq. In his trademark Josh, the minister went on to claim Pulwama terror attack, which killed 40 Indian soldiers, as a huge victory of Pakistan under the leadership of Imran Khan. “Humne Hindustan ko ghus ke maara hai (we hit India in their home). Our success in Pulwama was the success of the nation,” Chaudhry said, berating the PML-N leader.

Chaudhry just fell short of breath, otherwise the flow in which he was, he might as well have taken credit for crashing planes into the World Trade Centre on 9/11.The minister’s ramblings were astounding and could have serious repercussions for Pakistan.