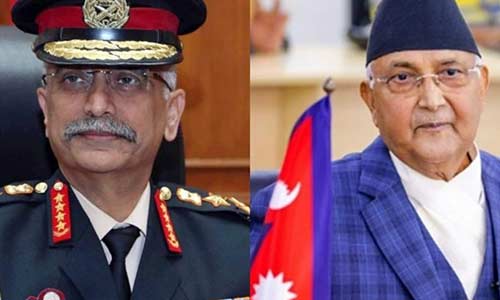 Nepal and India have a long-standing and special relationship, Nepal Prime Minister KP Sharma Oli has said to Indian army chief Manoj Mukund Narwane as the duo had a courtesy meeting on Friday. The present issues between the two countries will be resolved through dialogue, Nepal Prime Minister expressed hope.

“The prime minister said that there was a tradition of conferring the status of honorary Maharathi on the army chiefs of the two countries. During the meeting, the PM expressed confidence that the issues between the two countries would be resolved through dialogue,” Rajan Bhattarai, foreign policy advisor to KP Sharma Oli tweeted.

Gen Naravane who is on a three-day visit to Kathmandu was conferred the honorary rank of General of the Nepali Army by Nepal’s President Bidya Devi Bhandari on Thursday. He was honoured at a ceremony at the President’s official residence Shital Niwas in Kathmandu. General Naravane was also presented with a sword and scroll during the function.

On Friday, the meeting between Naravane and Oli, who is also the defence minister of Nepal, took place at his official residence in Baluwatar.

The visit is aimed at resetting the bilateral ties that came under severe strain following a bitter border row early this year. In May, Nepal came up with a new political map claiming several areas in Uttarakhand to be part of its territory. Nepal had protested after Defence Minister Rajnath Singh inaugurated an 80-km-long strategically crucial road connecting the Lipulekh pass with Dharchula in Uttarakhand on May 8.

After Nepal released the map, India reacted sharply, calling it a “unilateral act” and cautioning Kathmandu that such “artificial enlargement” of territorial claims will not be acceptable to it. 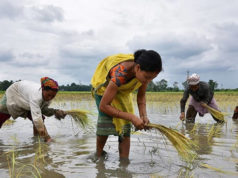