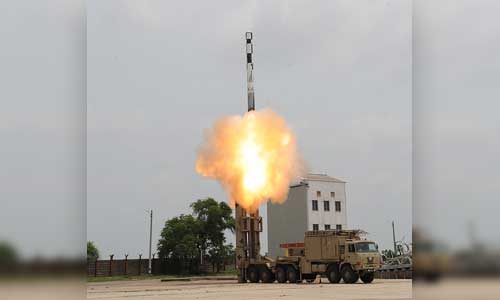 Maritime security entails provision of a secure environment, both at and from the seas, which enhances national growth. According to the Indian Navy’s chief Admiral Karambir Singh, “This maritime environment, however, is impacted by numerous trends and events, which are inimical to maritime security. Leading global powers are locked in a complex interplay across multiple domains, which include military, trade, technology, economic, climatic and many more issues affecting the strategic environment.”

Earlier this month, Defence Acquisition Council (DAC) of Ministry of Defence announced the induction of Next-Generation Maritime Mobile Coastal Batteries (Long Range) or, NGMMCB. These NGMMCB units shall be equipped with supersonic BrahMos anti-ship missiles and operate as a cluster of Surface to Surface missile (SSM) complex along with a Command & Guidance mobile unit.

“The BrahMos SSM is a two-stage missile, with a separable solid propellant booster as the first stage and the second stage as the liquid ramjet engine, which gives about 3 Mach supersonic speed during Cruise and Terminal phases. It is a ‘fire and forget’ low Radar Cross-section missile having few meters of low flying terminal altitude with a short non-interceptable flight path,” explained Milind Kulshreshtha, Artificial Intelligence and C4I expert.

This super-sonic sea-skimming missile is hard to detect. Thus, any effective missile countermeasures by a hostile warship are futile. This happens because of the high level of kinetic energy due to supersonic speeds which makes the explosive warhead very potent so as to sink the ship on impact.

In January 2019, against the backdrop of the 26/11 incident, the Indian Navy had undertaken the largest coastal defense exercise codenamed ‘Sea Vigil’, as reported earlier by Financial Express Online. The Exercise Sea Vigil was undertaken along the entire 7516.6 km coastline and EEZ involving 13 coastal States and Union Territories.

For augmenting Maritime Domain Awareness (MDA) through the Coastal Radar chain and various other systems, a multi-tiered patrol, and surveillance mechanism which was focused on technical surveillance was undertaken. Real-time information sharing through the National Command Control Communication and Intelligence (NC3I) Network was achieved.

Apart from the Indian navy and the Coast Guard, the conduct of the exercise SEA VIGIL was also facilitated by the Ministries of Defence, Home Affairs, Shipping, Petroleum and Natural Gas, Fisheries, Customs, State Governments and other agencies of Centre/ State.

Definitely, a well-camouflaged NGMMCBs unit strategically positioned along the coast makes for a potent weapon as these are hard to detect and can deliver a fatal blow to an adversary lurking within its Weapon Engagement Zone, within no time.