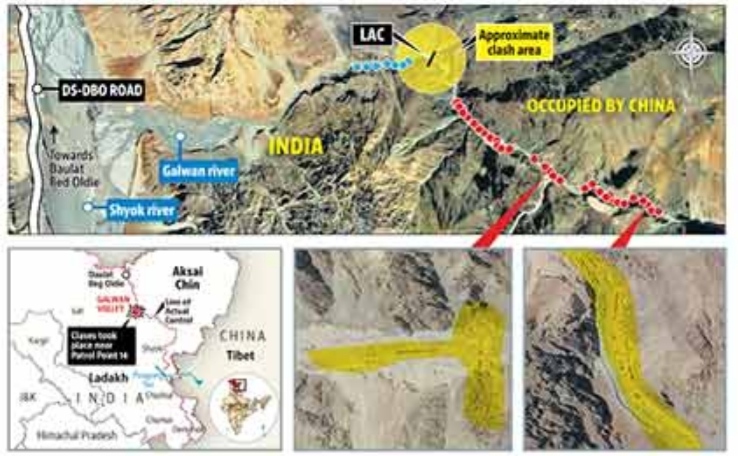 Army HQ has confirmed a total of 20 casualties in the Galwan stand off with the Chinese. As per Initial Report there were only three casualties and same was issued in a statement i on Tuesday afternoon. As per Final Report another statement was issued in the evening saying, “17 Indian troops who were critically injured in the line of duty at the stand-off location and exposed to sub-zero temperatures in the high altitude terrain have succumbed to their injuries, taking the total killed in action to 20.”
It is pertinent to mention here that though the Chinese have accepted casualties on their side they have neither informed their Countrymen nor given any casualties figures to the media.

The clash between Indian and Chinese troops in which both sides suffered casualties on Monday began at around 7 pm in the Galwan Valley when an Indian Army squad of about 50 soldiers, led by Colonel Santosh Babu, reached a contested site near what is known as Patrol Point 14.

The soldiers were unarmed, as part of a protocol between the two sides. Forward troops patrolling the disputed border either do not carry guns, or, if they do, keep them slung on their backs with the magazines in pouches and not clipped on.

The Chinese soldiers were supposed to have withdrawn from the location under a de-escalation plan discussed by senior commanders from both sides on June 6. “But the Indian squad found the Chinese troops, in violation of that understanding, did not pull back and their tents and an observation post was still around,” said one of the persons cited above.

In a matter of minutes, the soldiers were locked in hand-to-hand fighting that triggered a seven-hour violent face-off involving reinforcements from both sides. The clashes spread out from the Patrol point 14 area to a nearby narrow ridge overlooking the river. It was here that both sides suffered casualties.

The soldiers exchanged blows, threw stones at each other, and the Chinese troops attacked Indian soldiers with iron rods and nail-studded clubs. Some soldiers, from both sides, fell into the water and their bodies were later retrieved on Tuesday morning.

The external affairs ministry corroborated this sequence of events on Wednesday when it detailed a conversation between foreign minister S Jaishankar and his Chinese counterpart Wang Yi. In a phone call, Jaishankar told the Yi that the Chinese soldiers’ actions “reflected an intent to change the facts on the ground in violation of all our agreements to not change the status quo”.

Jaishankar, in his call, underscored the need to implement the June 6 understanding reached by the military officials of both sides as part of a phased de-escalation strategy to ease tensions that had persisted for weeks. The plan was discussed between Lieutenant General Harinder Singh, commander of Leh-based 14 Corps, and Major General Liu Lin, commander of the People’s Liberation Army (PLA) in the South Xinjiang region.

According to it, the Chinese side was supposed to have fallen back around 5km to the east of the location, said the third official. They retreated a bit last week but came back to retake the positions they had temporarily vacated, this person said.

On Monday, the Chinese deployment had numerical superiority over the Indian side — more than 250 of them were present in the area when the Indian squad, despite being fewer in numbers, demanded the PLA remove the structures and withdraw in order to return to status quo, these officials added.

“The Chinese were, however, adamant on holding their ground. They seemed prepared for a face-off,” said the second of three officials who was aware of the confrontation, asking not to be named.

In the first wave of clashes on Monday night, Babu and two other soldiers were grievously hurt and succumbed to their injuries. Reinforcements arrived from the Indian side within an hour and the brawl spilled over to beyond midnight, the third person said, adding that the face-off involved more than 500 soldiers from both sides.

The clash took place in pitch-dark conditions and resulted in 20 deaths on the Indian side, and possibly 40-45 casualties including injuries on the Chinese side, pushing the bilateral relationship between the two nuclear powers to an all-time low.

They were the first Indian casualties in a border skirmish with the People’s Liberation Army since October 1975 when Chinese troops ambushed an Indian patrol in Arunachal Pradesh’s Tulung La sector and shot four soldiers dead.

The deadly confrontation came on a day when army delegations from India and China held talks at two locations along the LAC — one involving brigadier-ranked officers who met at the Galwan Valley, and the other between Colonel-ranked officers at Hot Springs — as part of continuing efforts to resolve the standoff.