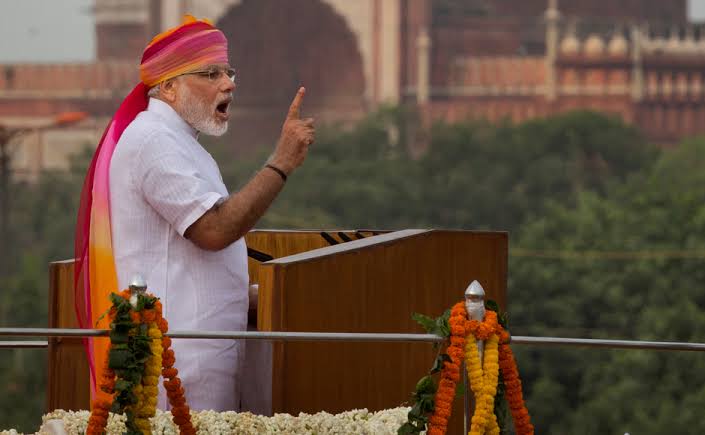 In his sixth speech on 15 August , Prime Minister Narendra Modi announced a major military reform of creating the post of CDSthat had been stuck for nearly two decades, attacked his critics over the now-scrapped special status given under Article 370 of the Constitution. He promised to work to improve the lives of India’s billion-plus population. PM Modi also spoke of the many dreams that people had – he invoked the word 46 times in his 92-minute speech — the ones that his government had for the country and sometimes, the challenges that stood in the way.

However he completely ignored Pakistan in his speech.PM Modi’s speech did not name Pakistan even once, presenting a sharp contrast to the much-publicised speech by his counterpart Imran Khan less than 24 hours earlier that had focused entirely on India, PM Modi and even the RSS.

Khan had even gone ahead to predict that India would take action in Pakistan-occupied Kashmir, “more sinister” than the one launched in Balakot after the Pulwama terror attack. It was a reference to the Balakot air strikes by the Indian Air Force in February this year after a car bombing claimed by Pak-based terror group Jaish-e-Mohammed killed 40 troopers in the south Kashmir district.

“I want to give a message to [Indian PM] Narendra Modi, you take action and we will give a strong response…The Pakistan Army is ready…and the whole country is ready,” Imran Khan told the special session of PoK’s legislative assembly.

Imran Khan’s remarks were seen to be designed to amp up the rhetoric over India’s recent moves on Jammu and Kashmir’s status and try to internationalise the Kashmir issue.

The only critics of the move that PM Modi responded to were in the opposition.

Without naming Pakistan, PM Modi did make a fleeting reference to terrorism in the world and the region and delivered a quick warning to those who give protection and support. They must be “completely exposed”, the Prime Minister said before pledging to destroy those who try to create an environment of fear and terror.

He said India’s neighbourhood had been affected by those who those who export terror, referring to terror attacks in Afghanistan, Bangladesh and Sri Lanka. By leaving out Pakistan out of this list, PM Modi signaled that Pakistan wasn’t a victim of terrorism as the government in Islamabad has repeatedly insisted.