Pakistan Feels The Heat On Illegally Occupied Portions Of Kashmir, Rattled By India’s Determination To Wrest It Back 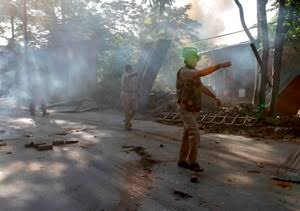 Pakistan has been trying to internationalize its claim over Kashmir since 1948. However now with India carrying out the abrogation of Article 370 of the Constitution the World has been told in no uncertain terms that Kashmir is an integral part of India, where no power on this Earth will be permitted to interfere.

Ever since Pakistan is trying to create artificial tension on the Line of Control between India and Pakistan and by threatening the World with the coming nuclear war.

It has reacted to India’s internal actions by downgrading diplomatic ties with New Delhi and expelling the Indian High Commissioner. By doing this Pakistan has further inflicted self injury to itself.

Pakistan calls on the international community to take “serious cognisance” of India’s “aggressive posturing” about taking “physical jurisdiction” of Pakistan-occupied Kashmir, too are falling on deaf ears. Soon it will be getting advice to vacate the illegally Occupied areas, on its own and that too at the earliest.

Addressing his first press conference after assuming office in May this year, External Affairs Minister S. Jaishankar hit out at Pakistan, saying India had a “unique challenge” from one neighbour and it would remain a challenge until that neighbour became a “normal neighbour” and acted against cross-border terrorism.

Asked about remarks by some Indian leaders that henceforth talks with Pakistan would be only about Pakistan-occupied-Kashmir (PoK) and not on Kashmir, Mr. Jaishankar said, “Our position has, is and will always be very clear on PoK, that it is part of India and we expect one day we will have physical jurisdiction over it.”

A Pakistani Foreign Office statement said “We strongly condemn and reject the inflammatory and irresponsible remarks made by the Indian External Affairs Minister regarding Pakistan and PoK.

These remarks are an obvious manifestation of India’s utter frustration over the continued international censure of its egregious human rights violations in Kashmir.” It knows that beyond issuing this statement, Pakistan is in no position to do anything.

Pakistan which main strategy is backing terrorism in Kashmir and crush the freedom of people of Baluchistan and POK, made a statement that it stands for peace, but would be ready to respond effectively to any act of aggression.

Instead of resorting to terrorism in J&K, Pakistan must rescind its illegal actions, stop forthwith grave human rights violations in Baluchistan and POK and POK and refrain from violating UN resolution. Pakistan must vacate POK at the earliest as directed by UN.