This morning, the Prime Minister had meetings with the leaders of five BIMSTEC countries.

A day after Prime Minister Narendra Modi was sworn in for the second time in a glittering ceremony at the Rashtrapati Bhavan, the focus is on the announcement of ministries assigned to the 57 members in the new government. Twenty-five of the new ministers are of cabinet rank.

BJP president Amit Shah, credited with crafting the party’s magnificent national election victory, is expected to take on a big ministry like finance. Others expected to be given big roles are Rajnath Singh, the second minister to take oath after PM Modi, Nirmala Sitharaman, Piyush Goyal and Smriti Irani.

The exit of Arun Jaitley, former finance minister, and Sushma Swaraj, who was foreign minister, has left two big vacancies in the cabinet.

In a tweet last night, PM Modi described his team 2.0 as “a blend of youthful energy and administrative experience”.

The first meeting of the brand new cabinet will be held at 5:30 pm on Friday. It will coincide with the GDP figures for the quarter and full year, which is expected to guide the new government’s economic priorities. 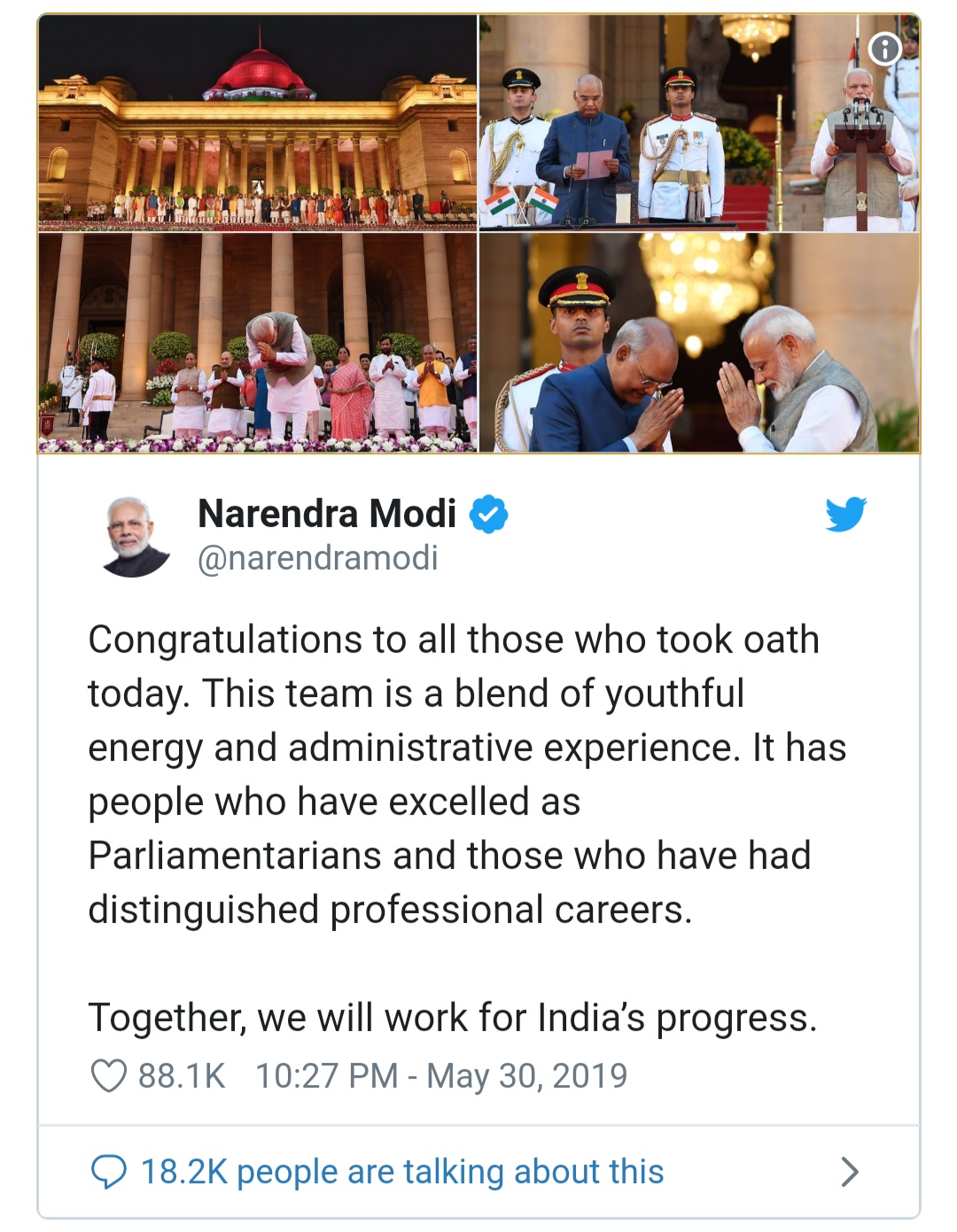 This morning, the Prime Minister had meetings with the leaders of five BIMSTEC countries.

“Our talks covered the full spectrum of bilateral ties between our nations and ways to deepen economic and social cooperation in the times to come,” the PM said in a tweet.

The presence of Ajit Doval in the photos tweeted by the Prime Minister were seen to indicate that he would remain National Security Advisor.

Among the big surprises in the council of ministers were the debut of former Foreign Secretary S Jaishankar and the exclusion of high profile ministers like Rajyavardhan Rathore, Suresh Prabhu, Maneka Gandhi, JP Nadda and Jayant Sinha.

Two key allies are missing from the government. Bihar Chief Minister Nitish Kumar said he did not find the BJP’s offer of one cabinet spot acceptable; he had asked for two, arguing that rather than “symbolic representation”, there should be “proportional representation” for allies. In Bihar, Mr Kumar’s Janata Dal United and the BJP contested 17 seats each – the BJP bagged all and the JDU won 16.

With 303 seats in the 543-member Lok Sabha, the BJP has enough numbers, well past the majority mark of 272, to set the terms. However, with a string of state polls ahead, the party would not want a rift with any of them.

Another ally missing in the ministry is Tamil Nadu’s ruling AIADMK, which could not decide its nominee because of a perceived tussle between Chief Minister E Palanisamy and his deputy O Panneerselvam, aka “EPS” and “OPS”.

The BJP’s Uttar Pradesh ally Apna Dal’s leader Anupriya Patel, who was a minister in the last government, also skipped the oath after being denied a spot in the cabinet.

The only alliance partners who were sworn in to the cabinet were Shiv Sena’s Arvind Sawant and Akali Dal’s Harsimrat Kaur (a minister in the previous government).