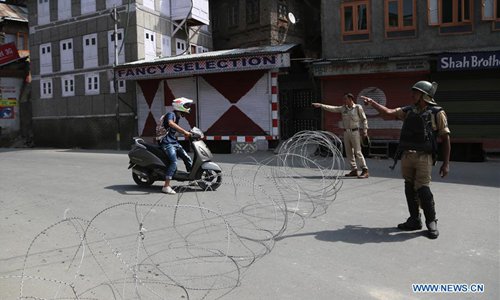 An Indian policeman and a paramilitary trooper stop a scooterist near a barbed wire barricade during curfew-like restrictions in downtown area of Srinagar, summer capital of Indian-controlled Kashmir, July 5, 2017.

Dummy police are the newest recruits to law enforcement in India’s southern city of Bangalore where authorities have adopted an unusual tactic to fight traffic offenders.

Mannequins dressed up as traffic officers – complete with hats, white shirts and fluorescent vests with police insignia – are being placed at major intersections in the hope they will prompt drivers to observe the rules. Some even wear sunglasses and face masks.

With eight million cars plying the notoriously busy roads in a tech-hub renowned for its traffic snarls, police say they don’t have enough flesh and blood officers to manage all the junctions.

“The idea is not to scare anybody, the idea is to increase the compliance,” city police commissioner Bhaskar Rao told AFP.

“There are 44,000 junctions in the city but traffic lights are fixed in (only) about 450 junctions, the rest of it is manned manually or not managed at all.”

Bangalore, dubbed as the Silicon Valley of India, is home to an estimated 13 million people.