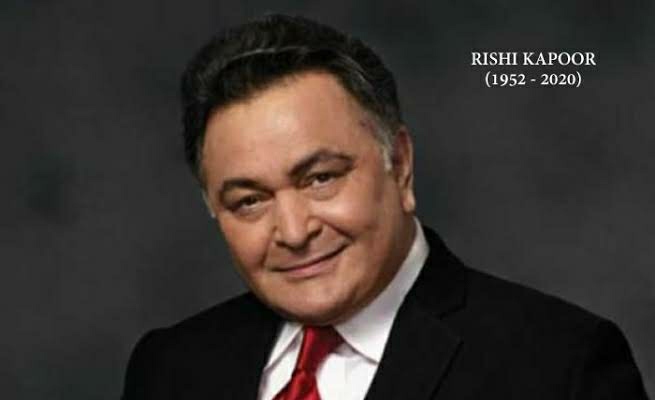 Rishi Kapoor passes away in Mumbai after a brave fight with cancer
Rishi Kapoor breathed his last today, at the age of 67. The popular actor had been unwell for a while and was admitted to a hospital in Mumbai. Neetu Kapoor and Ranbir had been constantly by his side. Randhir Kapoor had revealed in a report that Rishi was rushed to the hospital on Wednesday morning.
Amitabh Bachchan had shared a post on Twitter expressing grief about his co-star.

Rishi Kapoor had been shooting for ‘Sharmaji Namkeen’ in the capital when he fell ill earlier this year and was later shifted to a hospital in Mumbai. Reports suggest that the actor was battling cancer relapse. He was Raj Kapoor’s third born, after Randhir and later Ritu Nanda, he was older to Reema Jain and Rajeev Kapoor.
The Kapoor family has issued a statement which read, “Our dear Rishi Kapoor passed away peacefully at 8:45 am IST in hospital today after a two-year battle with leukaemia. The doctors and medical staff at the hospital said he kept them entertained to the last. He remained jovial and determined to live to the fullest right through two years of treatment across two continents.
Family, friends, food and films remained his focus and everyone who met him during this time was amazed at how he did not let his illness get the better of him. He was grateful for the love of his fans that poured in from the world over.
In his passing, they would all understand that he would like to be remembered with a smile and not with tears. In this hour of personal loss, we also recognise the world is going through a very difficult and troubled time.
There are numerous restrictions around movement and gathering in public. We would like to request all his fans and well-wishers and friends of the family to please respect the laws that are in force. He would not have it any other way.”
When he was admitted to a Delhi hospital, a source had earlier informed Mumbai Mirror, “Rishi ji has just been shifted from a Delhi-based medical facility to one in South Mumbai. It is just a viral fever, nothing to be worried about.”
Rishi Kapoor had also addressed rumours of his cancer relapsing and shared on Twitter, “I have been overwhelmed by all your concern about my health.Thank you. I have been filming in Delhi past 18 days and because of the Pollution and my low count of neutrophils, I caught an infection whereby I had to be hospitalized.
I was running a slight fever and on investigation,Dr.s found a patch which could have lead to pneumonia, was detected and is being cured. People seem to have assumed a lot different. I put to rest all those stories and look forward to entertain and love you.”

In September 2018, Rishi Kapoor and Neetu Singh took off to New York and the veteran actor underwent treatment for cancer close to a year. For a long time the ‘Chandni’ actor had kept his cancer battle a secret.

Speaking about his battle with the Big C in an interview with Mumbai Mirror in July 2019, Rishi Kapoor had stated, “I can now reassure everyone that the cancer is in remission, I just need a few more weeks before I return home. Once in a year or a year and -a-half I have to come back for check-ups.” Ranbir and Riddhima made frequent trips to the USA to meet the ailing actor. Bollywood celebrities likeD Padukone, Alia Bhatt and even Shah Rukh Khan had made it a point to visit the veteran actor when he was admitted to a medical facility in New York.

Adamant to keep working in front of the camera, Rishi Kapoor had signed up to play the lead alongisde Deepika Padukone in the Hindi remake of hit Hollywood film ‘The Intern’. The announcement was made recently by Deepika, who is also producing the film.

Rishi Kapoor is best known for his onscreen performance in films like ‘Amar Akbar Anthony’, ‘Bobby’ and ‘Chandni’. The actor also essayed an adorable role in his father’s iconic film ‘Mera Naam Joker’.