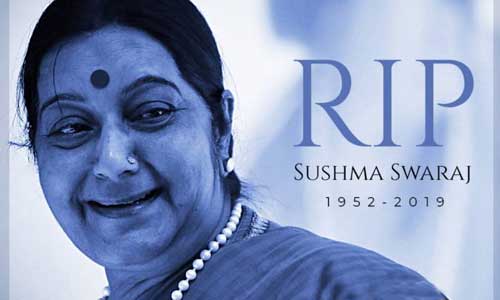 Former Minister of External Affairs Sushma Swaraj passed away on August 6 at the All India Institute of Medical Sciences (AIIMS) in New Delhi. She was 67.

The senior BJP leader was brought to AIIMS between 9:30pm and 10:00pm and was straight away taken to the emergency ward. AIIMS doctors said she died of a cardiac arrest.

Hours before her demise, Swaraj had put out a tweet in the evening congratulating Prime Minister Narendra Modi after the Centre’s move to revoke special status for Jammu and Kashmir. She had said:

Prime Minister Modi, in his tweets, hailed Swaraj as a “prolific orator and outstanding parliamentarian” and said she was admired and revered across party lines.

She had a kidney transplant in 2016 and had opted out of contesting Lok Sabha polls earlier this year for health reasons.

She is survived by her husband Swaraj Kaushal and daughter Bansuri.