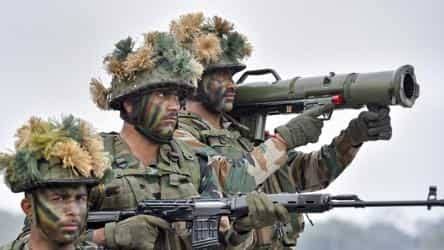 It was sometime in the winters of 1981-82. There was a severe Western Disturbance over Ladakh – heavy snowfall, as we called it ‘dhakkan’ in Leh / Ladakh. No flying, no mail couriers, no nothing. Only entertainment was ‘Mind Your Language’ on a video (there was no TV broadcast in Leh then)!

On the 14th day was bright sunshine. We were told to take the 3 Inf Div GOC to Darbuk.

We landed in Darbuk with the GOC and his SO. They proceeded to the Bde HQ for their briefing. The GOC asked us if we can return back after lunch. There was not a speck of cloud in the sky – we told him that there is no problem going back after lunch.

The helipad party looked after us – there was a young Maj with us.

After the GOC party cavalcade faded away towards Tangste, a young jawan approached us. He hovered around us but did not utter a word – probably muster courage to speak to us. After we finished our tea and the oily pakodas, we finally spoke to us. The conversation was (in Hindi):

Jawan: Saab, I want a lift to Leh.

Major (before we could react): Arre, how can you asked for a lift. You know the GOC is travelling back to Leh.

The Jawan was disappointed. I consoled him saying the road will be cleared of snow in two-three days. He can go then.

Jawan (almost pleading): Saab, I have to go today.

Me: Why? (I expected a standard answer – illness at home, wife pregnant etc etc)

Jawan: Saab, it is my marriage parsu.

I was taken aback. A unique request!

The Jawan further said “Saab, you got the bunch of my invitation cards when you delivered the mail, two weeks back. The next day mausam kharrab ho gaya Saab”.

We could only sympathise with him! He marriage was somewhere near Jaipur (Tonk, I think).

At 1430h the GOC and the SO arrived. There was chai for them in the helipad. The GOC enquired about our lunch. He was in a good mood.

His mein blurted me to say “Sir, that Jawan (pointing out to him in corner of the helipad) wants a lift to Leh”.

The GOC was surprised at my request. He said “As long as you take me and my SO back to Leh, you can take anyone else”. I that told him about this unique request from him!

I summoned the Jawan told him no baggage – he had a bulky holdall. (I remember tell him that either him OR his holdall).

The GOC boarded in the Cheetah, the SO in the centre (with their coat-purka, there was very less space for a third). Anyway, it was tight fit and we took off.

It was around 1530 h when we could establish RT contact with Leh. We heard an An-12 starting up.

There was a small hitch – we landed in the helicopter det dispersal – the An-12 was started up on the other end of the runway!!

During the switch-off, I told the GOC about the An-12 started up. He asked his SO to give the Stand-by Jonga for the Jawan.

Ten minutes later, the An-12 flew off and the ATCO confirmed to us that the Capt said the VIP is on board!

I presume the Jawan must have landed in Chandigarh by 6 pm, an overnight bus to Jaipur and at home 24 hrs before his wedding!!

Marriages are made in Heaven – but, it needs a General to make one on earth!!

(The GOC was Maj Gen SF Rodrigues, later the Army Chief and Governor of Punjab)