Tales Of Honour And Uniform 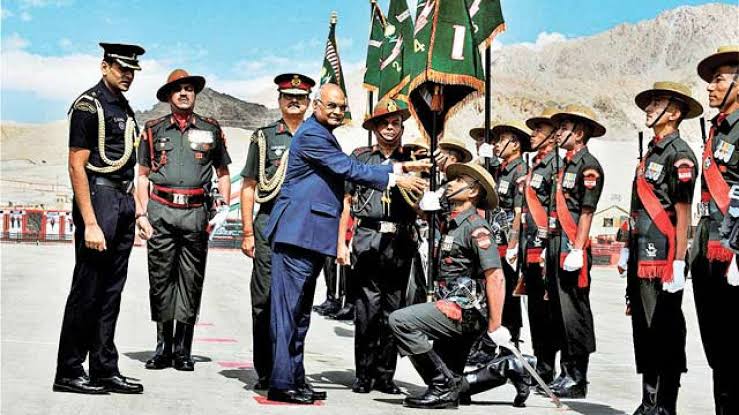 In Army career, we come across various incidents. Apart from the battle field, the emotions expressed by the Soldiers involved are typically human and that also peculiar to our own soil. In this series, I want to bring out some such tales. May look like fiction. But are true.

This is the story of Gunner Sardhool Singh from Punjab and Havildar Abdul Hameed from Tamilnadu. Sardhool Singh was from Artillery and Abdul Hameed was from Army Service Corps. They met each other in tragic circumstances. They were traveling in a 3 ton Vehicle, which was part of a convoy from Srinagar to Jammu .

Both were proceeding on their annual leave. Short of Udhampur, their vehicle skidded in the snow and plunged into a deep gorge, 300 feet down.

Most of the occupants of the vehicle had died. But, both the characters mentioned above survived and were evacuated to MH Chandigarh, by helicopter.

Sardhool had both eyes damaged and escaped with slight bruises. But, Hameed was in a precarious state. At the Hospital he was placed in DI (Dangerously ill) List and admitted in the ICU. By mid night, he came to his senses and asked the Sister attending him, as to the fate of “the tall handsome Sardar Gunner”. She told him that he was out of danger but both his eyes were damaged. Out of curiosity she asked him as to how he knew him.

Hameed said, “while traveling, that boy was quite anxious to get home fast, because he told me that he was married just six months back. He wanted to present his wife with the Pashmina Shawl he bought in Leh.” After some thought, he requested the Sister to kindly let him know of his condition in the morning.

After two nights, Sister Anasuya Theresa, was on duty again in the ICU. Hameed’s condition had further deteriorated. He was in life support system. With great difficulty, he gestured her to remove his mask so that he could speak. The Sister placed her ear close to his mouth.

Hameed told her that he wanted to donate his eyes to the ‘Handsome Sardar’ if that could help him getting his vision back. The sister immediately rushed to the Office Cub board and came back with a form. He signed it.

Then he made one more request. He wanted to meet Sardhool immediately. The Sister, knowing from her experience that this might be the last wish of the patient, brought Sardhool in a wheel Chair.

Sardhool was overwhelmed and tears were pouring from his bandaged eyes. Hameed was quite composed, like most of the human beings who reach their final moments.

“ Sardhool, I had an ambition to make a pilgrimage to Haj, in my life time. Now it is impossible. Though you may (If Allah willing), have my eyes, being a non Muslim you cannot make it either. But, try and visit Nagoor Dharga once, any time convenient to you”.

Years rolled by. Indra Gandhi was assassinated in 1984. The anti Sikh sentiment led to many meaningless violence across the Nation, reverberating even in the South as far as Coimbatore. The Surgeons could save one of his eyes, with the other getting partial vision.

In December 1988, Sardhool decided to fulfill the ambition of his benefactor. He found out about the Nagoor Dharga, which is visited by the people of all faiths. He reached Chennai by train.

Colonel Raman, who was his Battery Commander in 1979, was in Chennai, with the IPKF. Learning from Sardhool, who was a Havildar by then, the purpose of his visit, he immediately arranged for his onward journey.

Sardhool returned from his trip looking emancipated. Col Raman called him over for a dinner at his flat. After a couple of drinks, Sardhool opened up.

“ Saheb, after the accident, I felt that I also should have died instead of living as a blind man. Suddenly the Sister in the Hospital told me about the offer made by Havildar Hameed, whom I befriended only during our short journey together.

I could only hear his voice. I felt that it was not Hameed but one of our own Gurus speaking. His last wish was so simple and practical, considering the great sacrifice he was making. I till today revere him as my eleventh Guru.

To me it was not a request. It was a command from our own Guru. But, it had taken me nearly 10 years to fulfill his request. I am really ashamed. The Visit to Nagoor Dharga taught me many great lessons. In every religion, there are outstanding men, who live a normal, ordinary life, but full of pure thoughts.

The man who is devoted to his own Religion will never dare to insult other Religions. In Nagoor I saw the people from all the faiths paying their homage, but none sacrificed his own faith. I went around the Dharga four or five times, as if showing Hameed through his own eyes, the place he revered so much”.

Raman was impressed by his narration. Simple but great truth coming from a Sikh Soldier. “Okay, Sardhool, what have you resolved after your visit to the Dharga. Every one who visit the Dharga, I am told, take a vow”.

“ Saheb, I have taken two vows. First, to follow the foot steps of Hameed in helping others”.

“ That is commendable. What about the Second Vow?”

“ Saheb, I will never trim my beard in future. Continue to follow my own Religion”