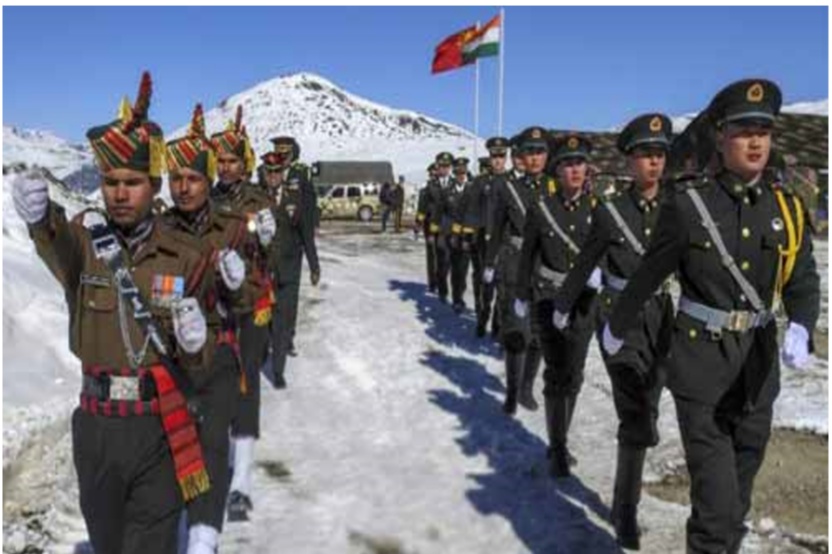 The Prediction has really come true as given in the last paragraph.

China is much bigger in size and population than India. However both are ancient civilizations and neighbours. There are cultural differences between India and China though Buddhism is a common religion for both the countries. The soft power of Buddhism spreading out from India across Himalayas engulfed not only Tibet and then China but also Mongolia.

Towards East it spread out via land and sea to cover the entire South East Asia and most of the Indo Pacific. Hinduism too had spread out towards east but then to help it some hard persuasion of the Mauryas, Kalingas, Cholas and Pallavas had also been there.

In terms of economic power, these two countries till 1500AD had more than 50% of the World GDP, with India leading. Today China is number 2 Economy after the USA and India is at Number 3 position in PPP terms (the real ground level indicator of economy). At the military level Chinese military looks much more formidable than the Indian military.

However a critical analysis shows that not only India can stall the Chinese but even give back nice and proper on both land and air leading to even unravelling of China. At Sea however the Chinese still remain “ at sea”. Within the Indian Ocean Region the Chinese Naval deployment will be swamped by the Indian Naval superiority.

Though within South China sea, the Chinese definitely have an edge. Therefore in spite of all the eye ball to eye ball staring, China cannot risk a confrontation and neither should India.

The Doklam crisis must have come as a shock to the Chinese who for long had got used to having things their way. In 2017 Beijing suddenly realized that it actually had no military advantage or superiority over India and now India had demonstrated the will and capability to stalemate China. India was ready to stand up in any conflict including a nuclear exchange.

China thus quickly concluded that any assertion of its super power status through border incidents will be aggressively contested by India even at the risk of an escalation like it happened earlier though at much lower scale during 2014 Demchok and Chumar standoffs.

Chinese also understood that the escalations like Doklam now had the potential of taking the conflict into Tibet itself. And this time the newly raised Indian Strike Corps that is 17 Corps together with Special Frontier Force gave India the capability to turn the tables in Tibet.

Hong Kong, Xhinjiang and Taiwan crisis if they to erupt at the same time then it can become a nightmarish scenario for the Chinese Communist rule.

Consequently, both sides agreed at the Wuhan summit to issue “strategic guidance to their respective militaries to strengthen communication in order to build trust and mutual understanding and enhance predictability and effectiveness in the management of border affairs.” It was also agreed “to earnestly implement various confidence-building measures agreed upon between the two sides.”

China had secured all Indian territory it needed much before the 1962 war. Then it slapped a War on India to humiliate it Internationally.

Next before the Indian Army could fully mobilize itself and prior to the Winter closing the various routes, Chinese vacated all captured territory, barring some strategically important areas in Ladakh (as per its claims) in Depsang, Sirijap-Khurnak Fort, Kailash Range and Demchok areas ( all sliced up between 1959 to 1962 before the war).

Since then, apart from the historic territorial claims of the Chinese and their claims of perceived threat to Tibet emanating from India, there has been no physical confrontations along the Line of Actual Control (LAC).

Except, Chinese have been asserting their hegemony by issuing Statements on Arunachal from time to time which are just ignored by India. Though now India may also start issuing statements on happenings in Hong Kong, Tibet and Quighers thus embarrassing China.

Since 1962 China has managed to create ‘differing perceptions’ along the border to gain negotiating advantage and to needle India. Of these, nine areas are disputed where so called intrusions or incidents have taken place. There are 14 other areas where Chinese have mischief potential.

Border incidents occur during routine patrolling up to the respective claim lines by both sides in areas of ‘differing perceptions’. Technically, these can be termed as intrusions and both sides lodge protests at border meetings and through diplomatic channels. The media, then blows up these ‘intrusions’, which number 400-500 every year.

Though incidents like Doklam are treated as serious and contain the seed for dangerous escalation.

All Indian prime ministers until May 2014 failed to respond to Chinese aggressions. India instead focused on economic relations while putting the contentious boundary dispute on the back burner, this being perceived as sign of Indian weakness.
But things changed in 2014 when Prime Minister Narendra Modi came to power. While he generally sustained Strategic restrain, Modi adopted a tougher stance with respect to border incidents.

Since 2014, there has been a visible change in India’s strategic response, both diplomatic and military. Modi openly played the ‘Tibetan card’ when he invited the head of the Tibetan government-in-exile for his swearing-in in 2014. During President Xi Jinping’s visit in September that year, when China attempted to embarrass the new government by intruding into Demchok and Chumar sector, India responded aggressively by camping opposite the Chinese troops and to the flanks to isolate the intrusion. Modi even took the unusual step of diplomatically cautioning China during the joint press conference. The situation was diffused by the end of that month.

India openly opposed the Belt and Road Initiative (BRI) and the China-Pakistan Economic Corridor (CPEC) by stating that it violated its Sovereignty.

Then it accorded a ‘semi-official’ status to Dalai Lama’s Arunachal Pradesh visit in April 2017, throwing a straight punch at China.

The Chinese responded by blocking India’s move to have Masood Azhar designated as a global terrorist by the UNSC and its quest for entry into the Nuclear Suppliers Group (NSG).

Last came the Doklam crisis lasting 74 days between June and August, when China and India came closest to an actual military confrontation since the Nathu La incident in 1967.

Taking note of the risk of an escalation between two nuclear states, both sides mutually agreed to diffuse the situation, thereby paving the way for the Wuhan informal summit in April 2018.

Since Wuhan, the border management has improved. The ‘intrusive’ patrolling in areas of differing perceptions by both sides is better managed. All incidents and confrontations have been mutually settled at border meetings between local commanders.

As the Mamallapuram summit between Prime Minister Narendra Modi and Chinese President Xi Jinping concluded last week, China was reminded about peaceful trade with the Palavas and the Chinese reiterated the Wuhan agreement on border management : “…efforts will continue to be made to ensure peace and tranquility in the border areas.”

For now both sides have showed no hurry to settle the boundary dispute. However, the days of China triggering embarrassing border incidents are over.

What the Chinese may have realized that a next DOKLAM with India in conjunction with other fault lines in China may prove to be the last straw on camel’s back and lead to unravelling of the vast Empire.