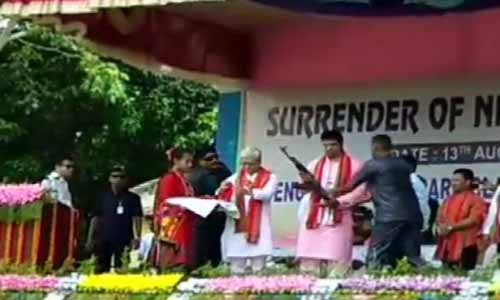 The surrender comes days after the Ministry of Home Affairs and the Tripura government signed a Memorandum of Settlement with the banned insurgency group. NLFT (SD) has agreed to join the mainstream and abide by the Constitution of India.

After the agreement was signed on August 10, the Chief Minister had tweeted, “NLFT has decided to join the mainstream and abide by the Constitution of India. 88 cadres have decided to surrender with weapons.

Our State Government will help them in housing, recruitment and education. I welcome the decision by NLFT and glad to inform you all that a memorandum of settlement has been signed by @mygovindia, government of Tripura & NLFT.

NLFT has been involved in violence activities previously and is banned since 1997. Now they have agreed to abjure the path of violence.