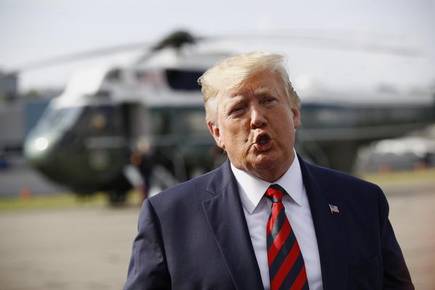 After the Donald Trump’s announcement of withdrawal of US forces from Syria, Turkey has started attacking Kurdish area in Northeast Syria.
India has already condemned the Turkish action and contemplating other actions. Whole world is also condemning Turkey and its President Tayyip Erdogan for invasion in Syria.

US president Donald Trump has said that he was trying to end the endless wars and said, “Turkey has been planning to attack the Kurds for a long time. They have been fighting forever. We have no soldiers or Military anywhere near the attack area. I am trying to end the ENDLESS WARS. Talking to both sides.”

Donald Trump has also threatened Turkey and said, “Turkey is a member of NATO. Others say STAY OUT, let the Kurds fight their own battles (even with our financial help). I say hit Turkey very hard financially & with sanctions if they don’t play by the rules! I am watching closely. “

Donald Trump also stated that US had defeated 100% ISIS in Syria and said, “We defeated 100% of the ISIS Caliphate and no longer have any troops in the area under attack by Turkey, in Syria. We did our job perfectly! Now Turkey is attacking the Kurds, who have been fighting each other for 200 years.”

Donald Trump further said, “We have one of three choices: Send in thousands of troops and win Militarily, hit Turkey very hard Financially and with Sanctions, or mediate a deal between Turkey and the Kurds! “

On Oct 7, Donald Trump had threatened Turkey and said, ” if Turkey does anything that I, in my great and unmatched wisdom, consider to be off limits, I will totally destroy and obliterate the Economy of Turkey (I’ve done before!).”