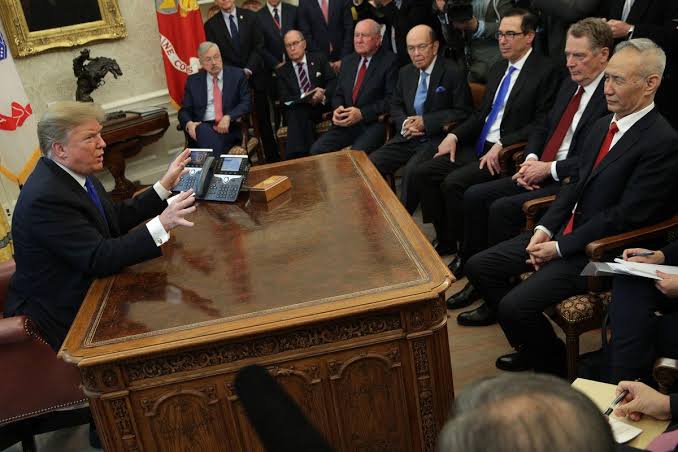 The US China Economic Warfare was having a bad effect on Australian psyche. As it is, such tussles have the potential to slowdown world economy.

Chief economist Craig James said that overall, the US China agreement was a positive first step for the US, China and the world more broadly. Much would depend on what can be agreed for phase two, as well as the adherence to the commitments in phase one. “China says that the extra purchases of US goods won’t be at the expense of other countries. We’ll have to wait and see,” he said.

China’s commitment to buy $200bn of US goods over two years could come at the expense of Australian farmers and energy providers, but the truce in the ongoing Trade War will be a confidence boost for global markets, Australian trade minister Simon Birmingham has said.

“This is welcome news. Australia has long called for a reduction, a cessation of the trade war between the United States and China – it was hurting global economic growth, and so we welcome the fact that this agreement has been signed,” said the Ministet.

But he warned that the inking of the Phase 1 Agreement alone would not eliminate trade tensions between the world’s two largest economies.

“I think this is a truce rather than a complete elimination of trade tensions between the US and China,” Birmingham said.
Under the phase one deal, Beijing has agreed to buy $US50bn in agricultural products, $US50bn in energy supplies and $US75bn in manufacturing products. If this commitment is honoured, it is likely to see China buying less from other trading partners, such as Australia.

Asked whether farmers would not be impacted by the new deal, Birmingham said “we can’t say ‘won’t be’ completely, but certainly… this is a deal where … we see more upside than downside because of the confidence that it provides”.

“The bulk of those purchases [committed to by China to come from US sources] we would expect to happen as part of China’s growth, rather than substituting existing purposes. We’d expect them to be in areas that Australia is not particularly exposed to.”
Birmingham said Australian LNG supplies to China were secure, with long-term contracts already locked in.

As Chinese and US relations have foundered over trade over the past two years, Australia has been one of the major beneficiaries.

The share of Australia’s agriculture exports going to China rose to nearly 30% last financial year, a level of concentration to a single market not seen since the 1950s.
China is the leading export market for a broad variety of Australian food and agricultural products, from wool, cotton, barley and beef, to wine, table grapes and rock lobsters.

More broadly, the US and China’s focus on their bilateral trade comes at the expense of a commitment to the global trading framework.

The rules of the beleaguered World Trade Organisation – whose appeals court has been crippled by the US blocking appointments to it – benefit smaller and mid-sized economies such as Australia. Australian trade policy has been to bind the world’s most powerful economies more tightly to global trading rules, creating a more level playing field for smaller nations.

But he said there was concern that the deal would “undermine the principles of free trade and multilateralism” that have underpinned Australia’s approach to trade policy for many decades.

Beyond the Chinese commitments, the 86-page document outlining phase one of the trade deal also makes commitments around intellectual property, technology transfer and financial services.

Under the agreement the US has agreed to halve the tariff rate it imposes on $120bn worth of Chinese goods to 7.5%. But some high tariffs remain, including 25% sanctions on about $250bn worth of imports, including components that US factories use to assemble finished manufactured products.

There is no timeline for negotiations on “phase two”.