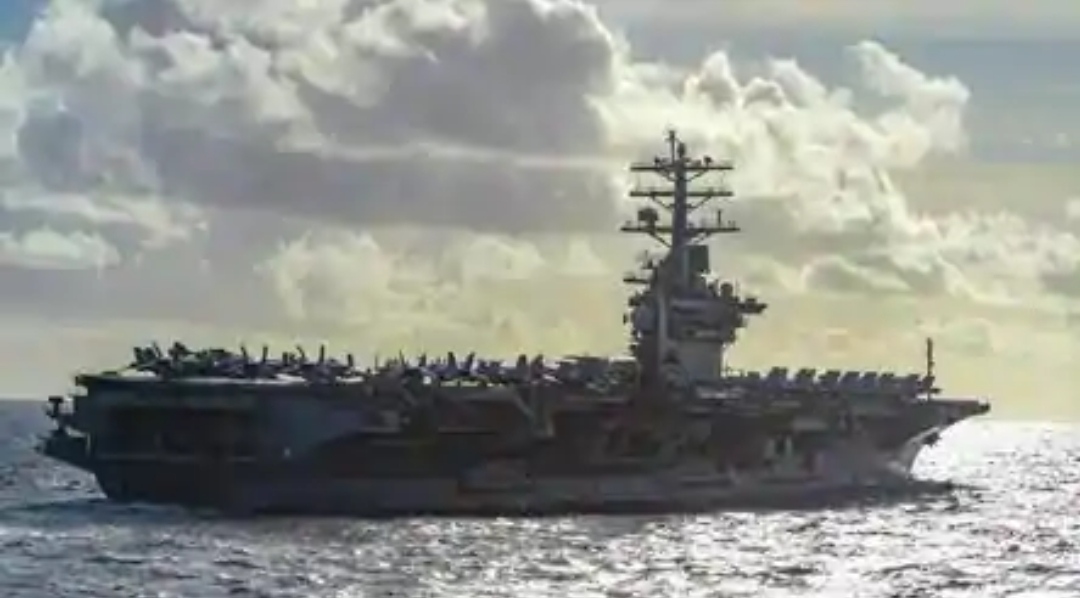 The US deployment comes after Beijing’s People’s Liberation Army Navy conducted military drills in the contested waters, provoking a sharp reaction from neighbouring states and Washington.

Two nuclear-powered aircraft carriers – USS Nimitz and USS Ronald Reagan – have been deployed by the US Navy in the South China Sea. (U.S. Navy)

The US Navy is deploying its two nuclear-powered aircraft carriers – USS Nimitz and USS Ronald Reagan – to conduct exercises in the South China Sea, piling pressure on an ambitious Beijing that has opened multiple fronts including one with India along the Line of Actual Control in Ladakh. The US supercarriers are reported to be crossing Luzon Strait, the strait between Taiwan and Luzon island of the Philippines that connects Philippine Sea to the South China Sea

The US deployment comes after Beijing’s People’s Liberation Army Navy conducted military drills in the contested waters, provoking a sharp reaction from neighbouring states and Washington. The US navy has said its operations in the South China Sea were designed to “support free and open Indo-Pacific”.

“The purpose is to show an unambiguous signal to our partners and allies that we are committed to regional security and stability,” Rear Admiral George M Wikoff commander of the strike group led by USS Ronald Reagan told Wall Street Journal, which first reported the exercises.

China claims 90% of the South China Sea through which about $3 trillion of trade passes each year. Over the last decade, Beijing has gone ahead to build man-made islands and set up military installations including military-grade airfields in several areas.

Brunei, Malaysia, the Philippines, Taiwan and Vietnam also lay claim to parts of the South China Sea, setting up many of the 21 disputes that an aggressive Beijing is embroiled in.

For now, the most serious crisis is on the India-China border where armies of the two countries are locked in standoffs at multiple points in Ladakh. India has deployed its soldiers along with 1,597 km-long LAC along the entire stretch of the border in East Ladakh, prepared for any eventuality.

But the LAC isn’t the only part of China’s border where it has been attempting to bulldoze its way through to expand its territory.

China’s military drills in the disputed waters have been sharply criticised by its neighbours. Philippines and Vietnam had last week spoken of growing insecurity in southeast Asia at an ASEAN event last Friday amid concerns that China is using the cover of the coronavirus pandemic to step up its presence in the disputed waters.

China’s PLA Navy had started the five-day military drills on July 1, prompting Vietnam to file its formal protest to the Chinese foreign ministry. China’s drills are being held near the Paracel Islands claimed by Vietnam and Philippines.

In its strongest statement yet, the Philippines has said the exercises are being held in waters claimed by Vietnam.

“Should the exercises spill over to Philippine territory, then China is forewarned that it will be met with the severest response, diplomatic and whatever else is appropriate,” Philippines foregn ministry said in a statement, according to news agency AP. The Philippines has a defence cooperation pact with the US.

Pompeo has been outspoken in his criticism of China’s expansionist approach, describing Beijing as a “rogue actor” for escalating tensions with India and other countries. Last month, he had underlined the degree to which the US is deploying its considerable military might with an almost single-minded determination to contain China.

Shinzo Abe’s Japan, which had been looking at improving ties with China till some months back, is set to cancel a state visit by Xi Jinping that had been deferred from April this year due to the coronavirus pandemic. Japan, which has raised its deployment around its Senkaku Islands that China eyes, has been upset with Beijing over its practice of sending its ships to the Senkaku Islands. Since April this year, Japan has spotted 67 Chinese Coast Guard ships near the islands in the East China Sea.

The 8 uninhabited islands and rocks in the East China Sea controlled by Japan have a total area of about 7 sq km and lie north-east of Taiwan and east of the Chinese mainland but are important because they are close to important shipping lanes and lie near potential oil and gas reserves.