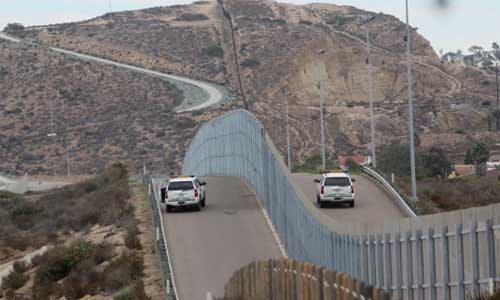 The United States is transferring $1.5 billion meant for Afghanistan and Pakistan to a fund to build the Mexican border wall, says acting Defence Secretary Patrick Shanahan.

The funds have been reprogrammed despite an increase in attacks inside Afghanistan and a complaint by the US chief negotiator that peace talks with the Taliban are not moving at a sufficient pace.

“We reprogrammed $1.5 billion towards the construction of more than 120 miles of border barrier without impacting readiness,” Mr Shanahan said in a statement released late Friday.

More than $600 million of these funds come from an Afghan security forces account while an unspecified amount was taken from the funds previously meant for Pakistan.

“The funds were culled from a variety of sources, to include unexecuted prior year funds, the suspension of reimbursements to Pakistan, and costs reductions in a series of contracts,” Secretary Shanahan said.

The Pentagon announced that the reprogrammed money will be used to build more than 120 miles of barriers along the US-Mexico border.

Ambassador Zalmay Khalilzad, who heads the US team negotiating a peace deal with the Taliban, said on Friday that the peace talks were not only moving at a slow place but had also failed to halt increasing attacks on civilian and military targets.

“We made steady but slow progress on aspects of the framework for ending the Afghan war. We are getting into the nitty gritty. The devil is always in the details,” he wrote in a tweet.

“However, the current pace of talks isn’t sufficient when so much conflict rages and innocent people die. We need more and faster progress. Our proposal for all sides to reduce violence also remains on the table,” he added.

US and Taliban representatives have held six rounds of direct talks since October in Doha, Qatar, to end the 18-year war in Afghanistan. The latest round of negotiations with the Taliban ended on Thursday.

The Afghan government, however, is not involved in the talks as the Taliban refused to sit with Kabul, after calling it a US “puppet”. Taliban spokesman Zabihullah Mujahid, however, has called the current round of talks “positive”, adding that “progress” was made on some points but others were “yet to be finalised”.

The talks have, so far, focused on two key points: the full withdrawal of foreign forces from Afghanistan and ensuring that Afghanistan is not used as a base to harm other countries.

Sher Mohammad Abbas Stanekzai, the head of the Taliban’s political office in Doha, and Mullah Baradar, a co-founder of the militant group, were leading the Taliban team in the talks.