The year ending 31 December2018 has seen growing power rivalry in the Indian Ocean region with stakeholders in the region as well as super powers outside playing dominant roles with small countries in the region such as Sri Lanka also getting deeply involved, willingly or otherwise.

The most recent US naval ship to come to Sri Lanka was USS Rushmore (LSD 47) with the embarked 13th Marine Expeditionary Unit. The ship left Port of Colombo on 26 December.

Sri Lanka Navy participated in the US Naval Exercise Rim of the Pacific (RIMPAC) which concluded on 2August, as well as exercise Cooperation Afloat Readiness and Training (CARAT) Sri Lanka, held for the first time last year.

While China is making attempts to play arole in the Indian Ocean region, it seems to push America to seek closer cooperation with India. This year, a significant number of joint naval activities have taken place between India and US. The two countries signed the bilateral Logistics Exchange Memorandum of Association (LEMOA) in 2016 and these activities in 2018 gave a clear indication of fully implementation of the pact.

The LEMOA is only one of the three foundational agreements proposed by Washington to deepen bilateral military cooperation and signed by India.. Easing logistical constraints under the LEMOA legal framework, Indian and US warships are being refuelled regularly by each other’s tankers at sea since the agreement came into effect. This includes refuelling of warship deployed in the Gulf of Aden for anti-piracy patrols.

Sri Lanka aims at becoming the most strategic naval hub in the Indian Ocean. Hence, it is of paramount importance to keep the ocean free of big power rivalry. Addressing the Indian Ocean Conference in September 2017, President Maithripala Sirisena called the littoral nations and the big powers to treat the Indian Ocean as a peace zone so that maritime shipping and utilisation of ocean resources could be conducted in a peaceful manner. He also recalled that it was Prime Minister Sirimavo Bandaranaike who first called on the United Nations to declare Indian Ocean as a Zone of Peace more than half a century ago.

Sri Lanka beingwell aware of its strategic location in the Indian Ocean. As an island-nation, Sri Lanka wishes to make maximum use of its proximity to one of the most important international sea routes.

China is quite open about its interest in the Indian Ocean. Earlier this year, China conducted its biggest-ever show of naval power, with nearly 50 warships sailing through the South China Sea.However it is in no position to match the Indian Navy in the Indian Ocean. It is for nothing that the Ocean is called Indian Ocean.China’s displays have prompted other Asian nations to cooperate more closely and initiate joint drills of their own.

Following that, Japan sent a large helicopter carrier and escort ships to the South China Sea and Indian Ocean, with the fleet making stops in the Philippines, Indonesia, Singapore, Sri Lanka, and India, and conducting joint military exercises along the way.

From time to time there were joint naval exercises by US and China. However, last year the US disinvited China from the biennial Rim of the Pacific exercise in Hawaii, despite its participation in previous years. American defence officials cited China’s continued militarisation of disputed features in the South China Sea as the reason. They said China’s moves were inconsistent with international norms and the pursuit of free and open seas.

India and US taking their new found defence cooperation very seriously. In the second week of December, senior Indian and US Navy officials held the 21st Executive Steering Group on bilateral naval cooperation in New Delhi to underlined how the naval partnership was getting stronger under the LEMOA pact.

Currently, there are two main military cooperation agreements between the US and India. Two countries signed the second foundational defence partnership agreement in September and the Communications Compatibility and Security Agreement (COMCASA) was signed by India and the US at the inaugural two-plus-two dialogue between their foreign and defence ministers. COMCASA pact is valid for 10 years.

US also expressed desire to establish a temporary logistics hub ashore Trincomalee in the East. The air logistics hub was first operated in August when USS Anchorage (LPD 23) visited Trincomalee, Sri Lanka and supported the Essex Amphibious Ready Group as it transited the western boundary of the 7th Fleet area of operations.

US Commander Task Force 70 Maintenance, Material, Logistics, Readiness,Commodore Fredrick Espy said the cumulative efforts of numerous stakeholders to facilitate the logistics hub in Sri Lanka will pay dividends for all future transiting units in addition to make the US Navy more sustainable and a more formidable force throughout the Pacific theatre.

All these military activities are evident of the United States, India and Japan have cast their eyes on the Eastern Sri Lankan port of Trincomalee to counterbalance the presence of the Chinese in Hambantota in the South and Colombo in the West and its growing clout around the Bay of Bengal.

What Sri Lanka interested is to keep the Indian Ocean free of big power rivalry.

Sri Lanka’s desire is to obtain the commercial interest from its strategic location as a hub in the Indian Ocean. Hence, the country should earnestly push the Indian Ocean Peace Zone concept first proposed by the world’s first women Prime Minister Sirimavo Bandaranaike in the 1960s and reiterated most enthusiastically by President Maithripala Sirisena at BIMSTEC Meeting in Kathmandu and Indian Ocean Rim Conference in Jakarta last year. 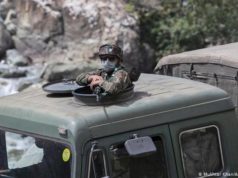