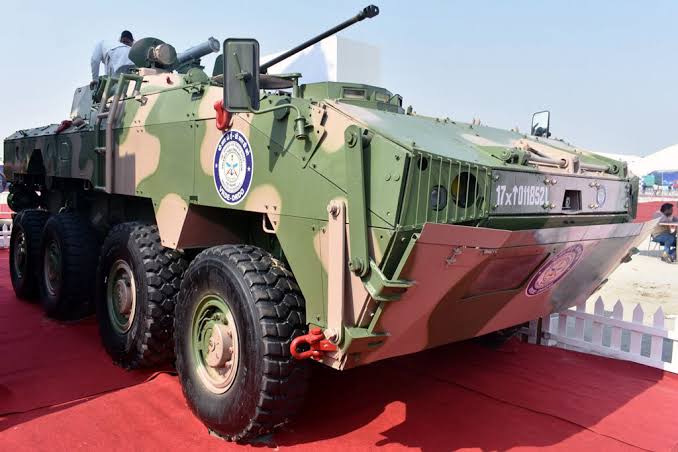 The WhAP with its BMP-2 turret offers a new generation of combat vehicle with a high level of protection and mobility based on an 8×8 chassis. It also provides high firepower with the turret armed with a stabilised 30 mm cannon 2A42 and a 7.62 mm PKT coaxial machine gun mounted to the left of the main armament with 2,000 rounds. Mounted on the turret roof between the gunner’s and commander’s hatches is a launcher for an AT-4 Spigot or AT-5 Spandrel ATGM (Anti-Tank Guided Missile) which has a maximum range of 4,000m.

The WhAP has a weight of around 25 tons and is powered by a 600 hp. diesel engine. It can reach a maximum road speed of 100 km/h. For amphibious operations, the WhAP is propelled in the water at a maximum speed of 10 km/h thanks to two hydrojets mounted at the rear of the vehicle.

TATA Motors had unveiled its Wheeled Armoured Platform (WhAP) at DefExpo 2014 in Delhi. The vehicle platform has been developed jointly with the DRDO’s Vehicle Research & Development Establishment (VRDE) in Pune. The WHaP is still in the trial phase including high-altitude and floating tests. Considering the high tension between India and China over border issues, these high-altitude tests are of particular interest.

In recent years, TATA Motors has made a strategic shift from the Logistic vehicles space to the Combat vehicle space by focusing on the development of contemporary state-of-the-art combat vehicle platforms (tracked and wheeled); with the dual purpose of empowering India’s Defence Forces with breakthrough technologies and increasing the nation’s self-reliance in this critical area. The idea is to ensure high mobility, firepower and protection to the forces for their various missions by developing world-class armoured fighting vehicles.