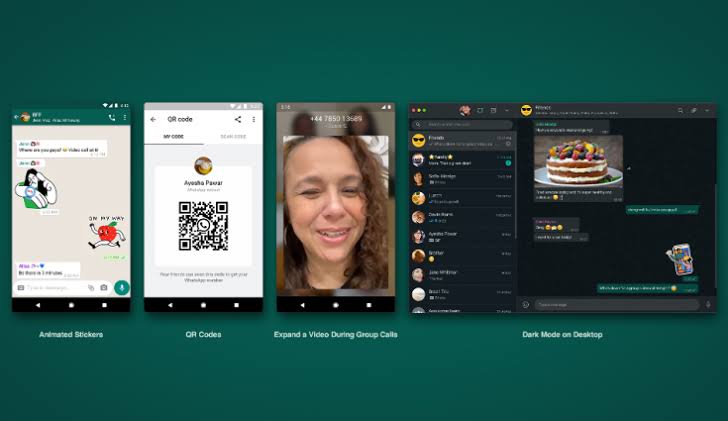 WhatsApp on Wednesday announced that the Facebook-owned messaging app will finally be getting the Animated Stickers, QR codes, Dark mode for web and others.

WhatsApp is also getting dark mode for web.
WhatsApp is finally getting the much-awaited features. The company on Wednesday announced that the Facebook-owned messaging app will finally be getting the Animated Stickers, QR codes, Dark mode for web and desktop, improved video calls, and disappearing status feature for KaiOS. The features will be rolled out for both Android and iOS apps in the coming weeks.

Days before its release, Wabetainfo—the WhatsApp features tracker, had informed the users that the company is testing the QR codes feature and working on the Animated stickers feature. Another highly anticipated feature is the multi-device support, that the messaging app seems to be working on for the longest time now. While we don’t know when that would be made available, we now have some of the interesting features like the QR codes, improved video calls, and more. So let us have a look at the functions of the newly released features.

QR codes— Gone are the days when you would require a person’s mobile number to add him to your WhatsApp as now with QR code feature you just need to scan and save their numbers. This makes the whole game a lot easier and time-saving, as you simply scan someone’s QR code to add them to your contacts. You don’t have to type out the numbers anymore.

Animated Stickers— WhatsApp has always launched features that are productive and that enhances the user experience. But the Animated Stickers feature makes your chatting experience fun. Users will get animated sticker packs to choose from and they can view, save, star, send, and forward the animated stickers once it is downloaded. But there is a slight lag that was reported by Wabetainfo and that can really put you off, the animated stickers play only once and lack a loop system. You also cannot replay it again.

Dark mode for the web- WhatsApp had released the Dark Mode for Android and iOS long ago but the much-awaited feature has finally come to the web version of the messaging app. Go ahead and have fun viewing your big screen in a dark mode!

Enhanced group video calls—WhatsApp had extended the group video call limit to eight from four and now it has also added some special features to it. Now you can focus on any one of your contacts by simply pressing and holding to maximize a participant’s video to full screen. A video icon has also been added to group chats comprising of 8 people or less, so now you can simply tap the video icon to start a group call.

Disappearing Status feature for KaiOS- WhatsApp has rolled out the disappearing status for KaiOS. The feature was already available to Android and iOS features.