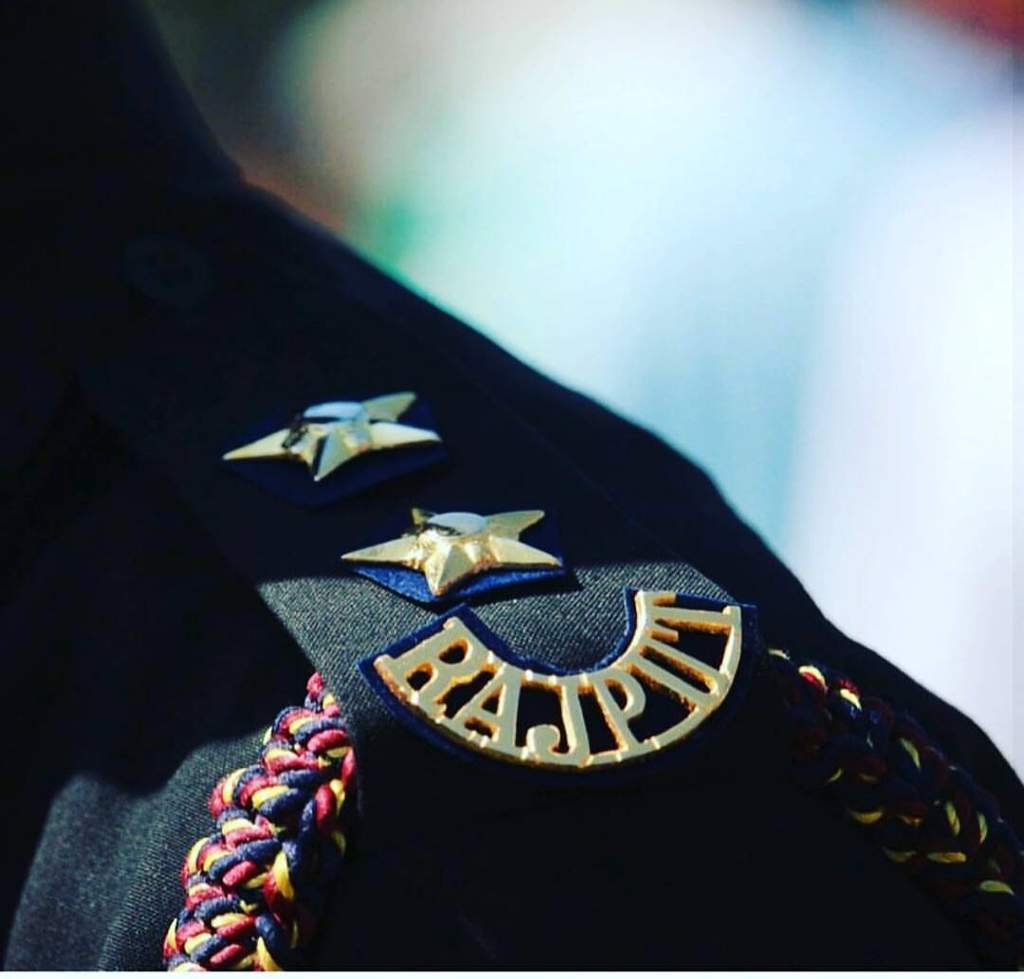 Major Ashutosh Pandey of 2 RAJPUT met the gallant Veteran of 1962 Major Onkar Nath Dubey at Varanasi a few days back. The story:

After couple of days’ telephonic interaction with Mr Rahul, son of Maj Onkar Nath Dubey, an image of how a 78 years old officer would look like was inscribed in my mind. When I actually met Maj Dubey, this image immediately shattered when instead a tall, vivacious & unprecedentedly fit figure gave me tight handshake and welcomed with the historic words “Hello, Prince Albert Victor’s own, how do you do?” His warmth & energy was as vibrant & vivid as the shining sun outside. While the pre conceived image shattered, heart immediately filled with extreme jubilation, privilege, honour and pride all mixed together. My unit officer, my place type and live testimony of unparalleled valour of gallant brave hearts of 2 RAJPUT (KALI CHINDI) was here. As a matter of fact Operation ONKAR for establishment of thirty five Assam Rifles posts along McMohan Line was named after him, which eventually became the unfortunate precursor to the Sino-India war that followed.

Although, as youngsters we have read so much about the 1962 ops in general and our unit’s role in specific, I was eager to hear the first-hand account from Maj Dubey and as soon as I sat down after the initial pleasantries, I shot off my eagerness. And true to the authority a unit senior has, I was instantly made to sit, relax and sip the perfectly brewed coffee instead. 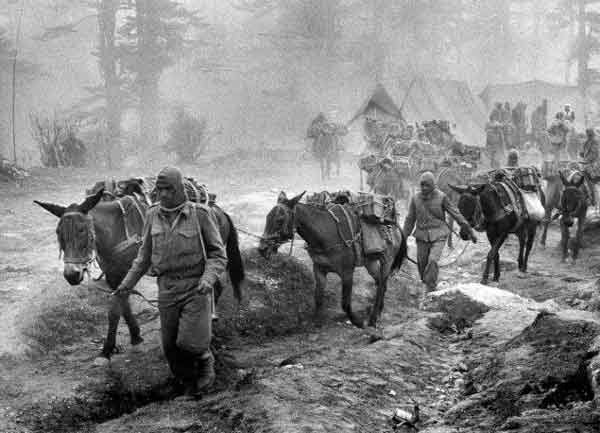 “Water of Namka Chu remained red for 2-3 days because of quantum of blood floating around, both of ours and Chinese”. What could have been a more chilling beginning of the narration of anecdotes on the wee hours of 20th October 1962, account of every single minute of which is inscribed in golden letters in the annals of 2 RAJPUT (KALI CHINDI).

At 5:14 a.m. almost 150 guns and mortars opened upon localities held at Namka Chu and continued for an hour, as Maj Dubey, a 2nd Lieutenant that time and his No 7 platoon of “C” company helplessly watched unable to counter it with any of their weapons. Their 3″ mortars made a futile attempt to fire back. After an hour or so there was a brief lull for 7 – 15 minutes before the Chinese bugles and whistles for an infantry attack became audible. To the shock of “C” company, to which Maj Dubey belonged to, the attack was from above and behind. Ostensibly, Chinese had crossed Namka Chu through Log Bridge and Temporary Bridge in the guise of graziers and occupied these heights.

The Chinese troops, enjoyed numerical superiority – 11,000 strong PLA Division against 4,000 Indian troops – and also the advantage of shooting down at the Indian Army from the heights of the Thagla Ridge. At the time the Chinese were also equipped with Russian automatic guns, while most of us were using the outdated Lee Enfield.303 British era rifles. 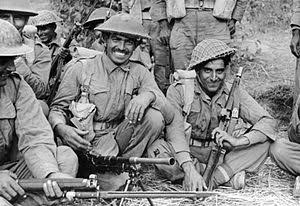 At Temporary Bridge, Subedar Dashrath Singh realised the direction of Chinese assault and moved Naik Roshan Singh’s section to a bump 150 yards upslope to counter them. Barely had Naik Roshan’s men taken position, the Chinese came in close proximity. With AK-47s opening up, they charged on Naik Roshan’s section. 2nd Lieutenant Dubey with 7th platoon rushed with 15 LMG magazines to support Naik Roshan. From the flanks he and his men poured fire on the Chinese breaking up two attacks. Firing the last 2 magazines at the enemy 2nd Lieutenant Dubey was grievously wounded in the stomach & chest and fell down unconscious. On gaining consciousness, he lifted his left hand to feel his wounds. All his four fingers easily slipped inside. Realising the quantum of wounds he stopped at that.

They had mere 50 rounds with them whereas Chinese enjoyed technical superiority with automatic weapons and probably no dearth of ammunition. But when the Chinese assaulted their localities, they killed as much Chinese with each bullet. They spent all their ammunition and subsequent Chinese assaults were countered with hand to hand combat. If on one hand, there were occasional single shots from our side, there were volleys of incessant automatic fire from Chinese. Such was the level of asymmetry in which the war was fought. Fresh from the evolution of Mao’s era, Chinese were not a professional Army as well. They bayoneted or shot dead the bleeding soldiers to remove possibility of carrying the wounded from the battlefield. 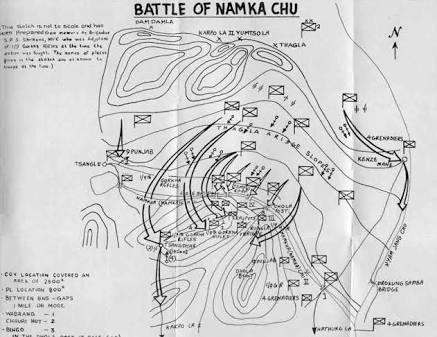 On 22nd October, when 2nd Lieutenant Dubey was being evacuated, there were 3-4 Chinese dead in vicinity of each RAJPUT martyr. Out of 70 men and officers of “C” Company of 2 RAJPUT (KALI CHINDI), only three survived to include Naib Sub Dashrath Singh and Naik Roshan. Such was the ferocity with which our gallant soldiers, JCOs and Officers fought. And here, I am restricting myself only with the acts of “C” company. The heroics and valour of fearless troops of 2 RAJPUTS (KALI CHINDI) put together is a story of unmatched gallantry befitting the finest traditions of Indian Army in active combat.

The Prisoners of War were taken at Marmang Camp near Lhasa in Tibet and the experiences of next three months at the camp are another heart wrenching tale of human perseverance. On reaching the Prisoners Of War camp, 2nd Lieutenant Dubey was first operated upon by the Chinese & Tibetan doctors. American doctors from International Red Cross came after four days and he was operated upon again. A total of 15 bullets were removed from the right side of his abdomen and chest. He was fortunate because had the bullets hit him few inches towards left, in all likelihood he would not have survived to narrate these historic anecdotes today. In the Prisoners Of War camp, medical and other facilities, least to say were poor. Imagine, the bandages were boiled, dried and used again. A thin mat to sleep and a dirty smelly quilt which lasted for three months. A single bowl as crockery in which rice and cabbage vegetable was all in the menu every single day. One time issue of 500 grams each of salt and sugar were the add ons. 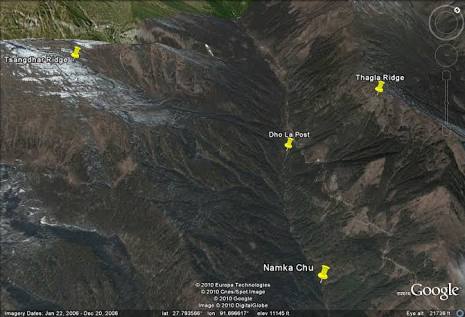 On 5-6 January 1963, the Prisoners of War were repatriated to India. True to the heroics a born fighter can think and execute, 2nd Lieutenant Dubey hid a Chinese Red Book within his bandages and brought it to India. After repatriation, 2nd Lieutenant Dubey was operated upon again because of constant pain and breathing problems. Miraculously, a 16th bullet was discovered in his chest which was removed by a surgeon Maj Bose who told 2nd Lieutenant Dubey that if Chinese left you to survive, we will make you fit to fight again. And so truly, he fought not one but two subsequent wars with Pakistan.

All this while listening to him, I constantly remained in a little predicament. Whether to hold off my tears, or to let loose my emotions on hearing every single words from him like Sanjay telling Dhritrashtra the compelling account of battlefield from Mahabharata. While balancing my demeanour to prove being worthy of a KALICHINDI officer, I chose the former, thinking I might let him down with the latter.

I wish I was a writer to better express his narrative of battleground, his immense emotions of having gallantly fought the Chinese and his unwavering affection for the unit. Still I couldn’t behold myself to keep a record of my interaction with this living legend. If people are said to have being built of steel, I was fortunate to see one today. And what could be a better luck for me to belong to a unit which has not only produced such men of steel whenever it was required but has occupied a place in history which is unmatched, unrivalled and outstanding.